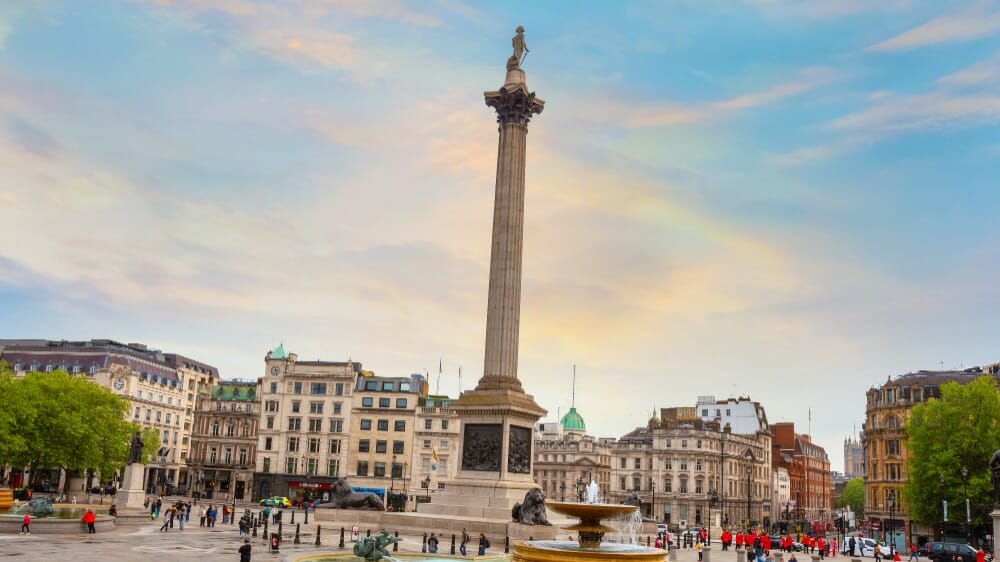 Located dead in the center of Trafalgar square, this icon has seen its share of tales throughout the years.

While famous for its large crowds during New Year’s eve and Christmas (when Norway donates a huge – now quite controversial- tree), it is best known for… you guessed it, Nelsons column.

There’s more to Nelson’s Column than meets the eye, protected by its famous four bronze lions.

Why was Nelson’s Column Constructed? 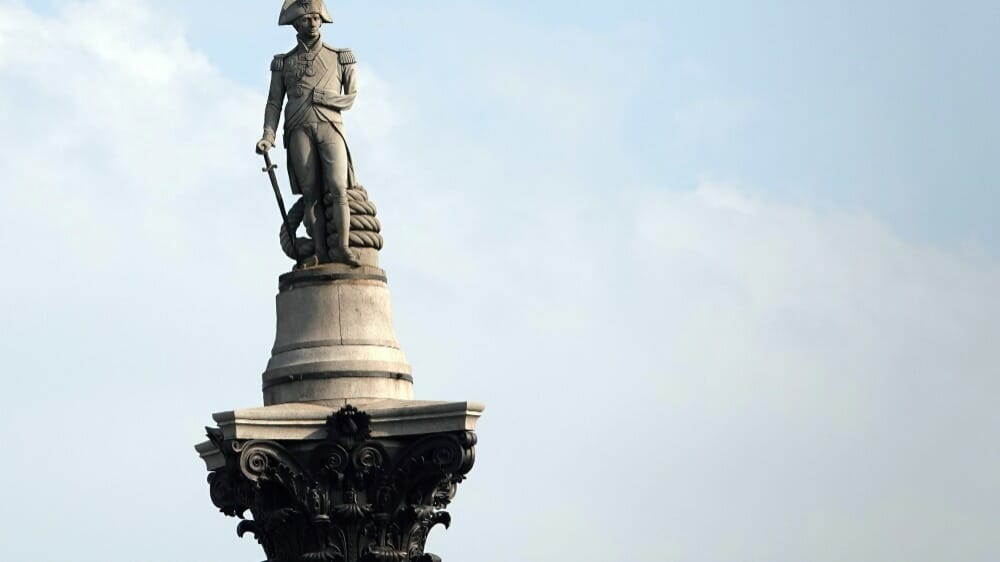 At first glance, seeing this Admiral Horatio Nelson figure standing 40 metres high in the sky might make you wonder: Who was this man?

Admiral Lord Nelson was essentially revered as a near-deity by the British.

The exploits of Admiral Horatio Nelson, his strategy and tactics, and his leadership helped to win numerous naval battles throughout the 18th and early 19th centuries.

Around the United Kingdom, there are numerous monuments to Nelson, including one at St. Paul’s Cathedral in London and the first civic monument created in Glasgow Green.

He is also honored with a monument in Canada and Barbados.

What is the height of the Nelson monument?

The height of Nelson’s Column is 51.5 meters from the bottom of the first step to the top of Nelson’s helmet.

For many years it was quoted as being 56.4m tall, until refurbishments in 2006 revealed that it was actually 4.42m shorter than previously thought.

How this mistake could have been made remains a mystery.

What Material Is Nelson’s Column Made Of? 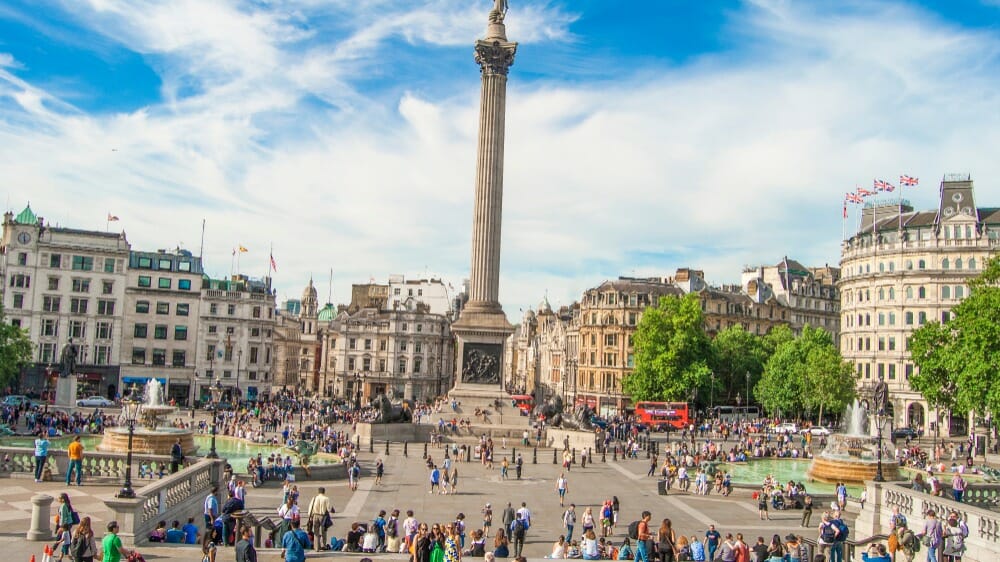 The Foggintor granite columns, base, and shaft were all crafted in Dartmoor.

Edward Hodges Baily’s Nelson statue was constructed from Craigleith sandstone, a material donated by the Duke of Buccleuch.

The capital of the column (the frilly bit at the top) was made out of bronze that had been repurposed from cannons on the wreck of HMS Royal George.

The foundry at Woolwich Arsenal used these recycled materials to create the Trafalgar Square lions, which were also cast in bronze taken from French and Spanish ships defeated during the Battle of Trafalgar.

What do the bronze panels at Nelson’s Column depict? 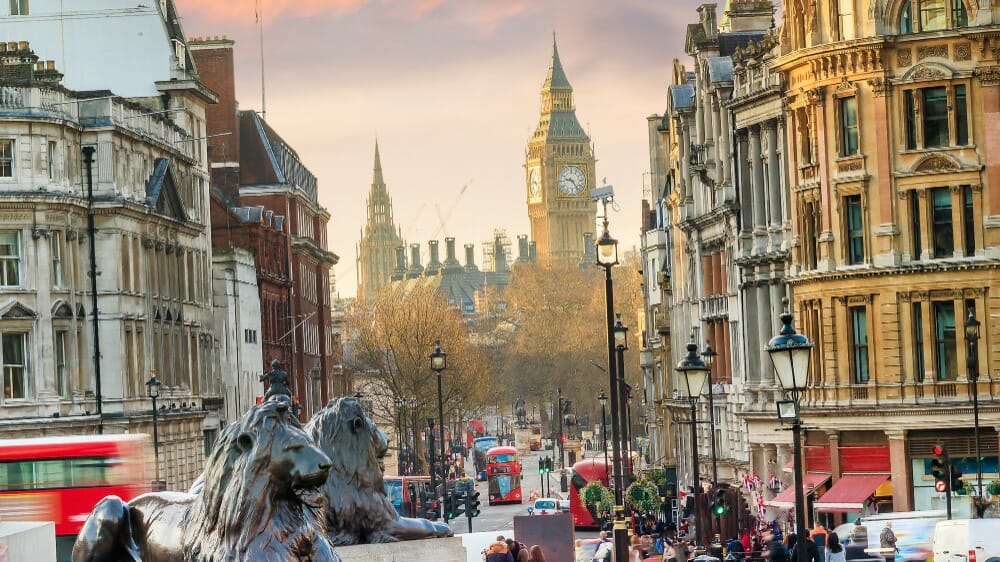 The Battle of the Nile faces the National Gallery while The Battle of Copenhagen looks towards the Strand, if you closely examine the four bas-relief battle scenes by various artists on the 5.5m bronzed squares.

In addition, underneath these features are Nelson’s famous words “England expects every man will do his duty.”

The final wall was Musgrave Watson’s The Battle of Cape St. Vincent, which was completed in 1839.

When the bronze was discovered to include iron, the participants were sentenced to jail time, resulting in a lawsuit.

Who Has Climbed Nelson’s Column?

In 1977 and 1989, Blue Peter presenter John Noakes and Six O’Clock Show presenter Gary Wilmot made organized attempts to climb Nelson’s Column. However, the column has mostly been climbed by activists.

The first climb of the column was made by Ed Drummond in 1978 for the Anti-Apartheid Movement.

Several others reached the top, such as Gary Connery in 2003, who did so to protest the Chinese policies in Tibet.

In 2016, a mask was placed on Nelson to protest the air pollution in London by Greenpeace activists. 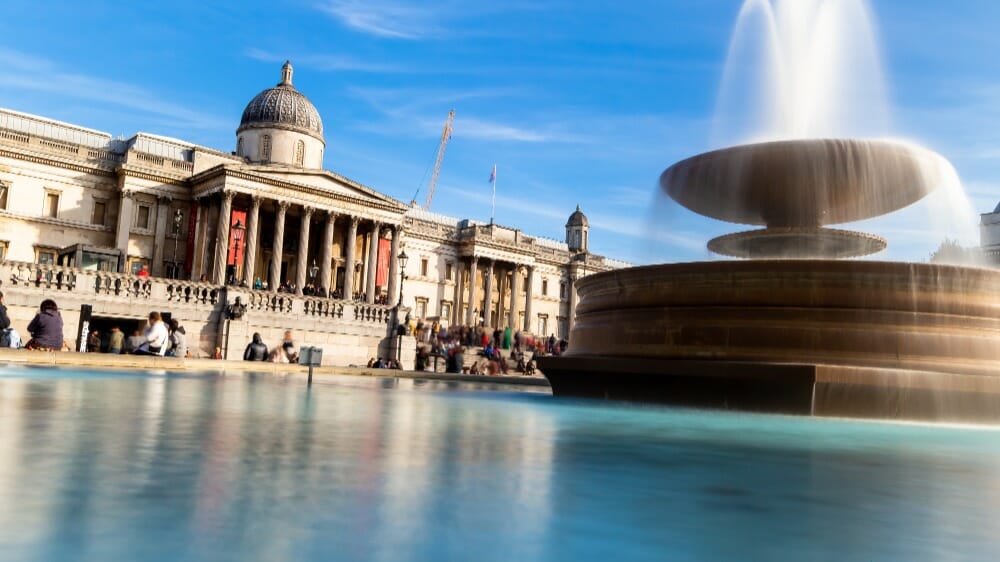 At the beginning of 1838, a group of 121 Members of Parliament and landed gentry decided to create a monument in Nelson’s memory.

The Nelson Memorial Committee was then formed.

With the help of public subscription, private donations (including a large amount from Nicholas, the Emperor of Russia), and eventually government funding when the project ran out money in 1844, the monument was completed.

London’s Trafalgar Square was a perfect location for the monument in front of the National Gallery.

A competition was held for the design process of the monument by the government, which was estimated at £20000-30000.

The Duke of Wellington headed the sub-committee that selected William Railton as the winner.

Based off the Temple of Mars Urtio in Rome, the column’s peak would have had Nelson on top with steps leading up to it. There were supposed to be four lion sculptures standing guard around the pedestal.

After the competition was pulled due to how it was organized, Railton made some adjustments to his design and still won.

The four massive bronze lions flanking the base of the column were added later. Back then, the project cost £47,000–a hefty sum in today’s currency.

What does Nelson’s column represent?

The Nelson Column, as it was once known, commemorates Admiral Horatio Nelson’s victory at the Battle of Trafalgar in 1805.

It took a while to get off the ground – construction wasn’t completed until 1843, nearly 40 years after Nelson’s death.

Why was Nelsons pillar blown up?

The pillar was blown up in 1966 by the Provisional IRA. They claimed that they did it as a protest against British rule in Northern Ireland.

What does Nelson have in his left hand on statue?

The statue of Admiral Lord Nelson on top of the elaborate monument is painted with his sword in his left hand.

What do the 4 lions in Trafalgar Square represent?

Four lion sculptures at the statue of Nelson base were added to represent Lord Nelson’s valor, according to the committee in charge of its planning.

Was Nelson a good admiral?

Nelson was a brilliant and audacious leader who was willing to take any risk necessary to achieve victory.

Many people around the world would agree that Lord Horatio Nelson (1758-1805), better known as HMS Victory, was an outstanding naval commander. He is widely regarded as being the finest admiral in history.