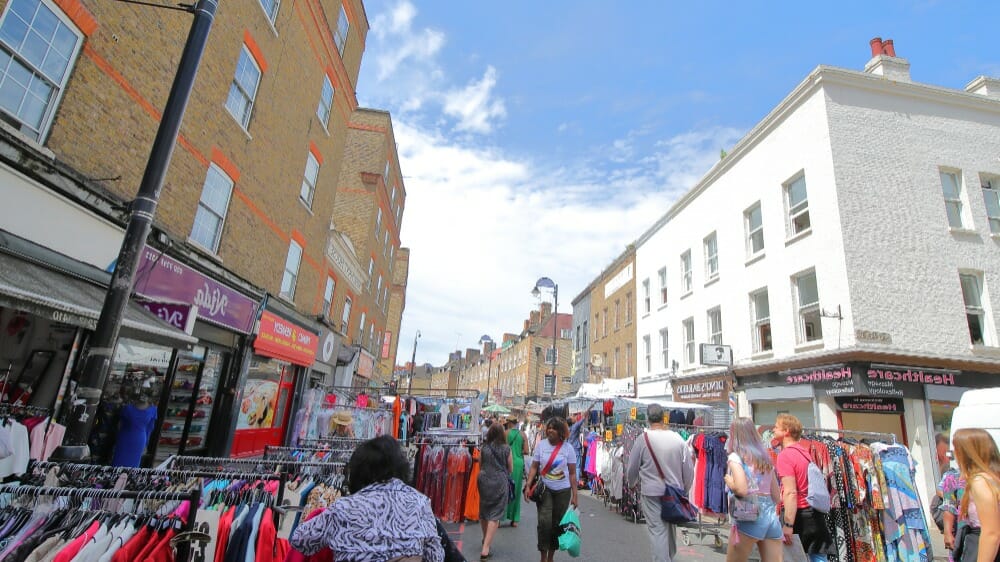 If you’re looking for somewhere to explore in London, Petticoat Lane Market is a great option.

With its affordable clothes and interesting trinkets, it’s perfect for bargain hunting.

Plus, it’s located in East London which is rapidly becoming a trendy hub. 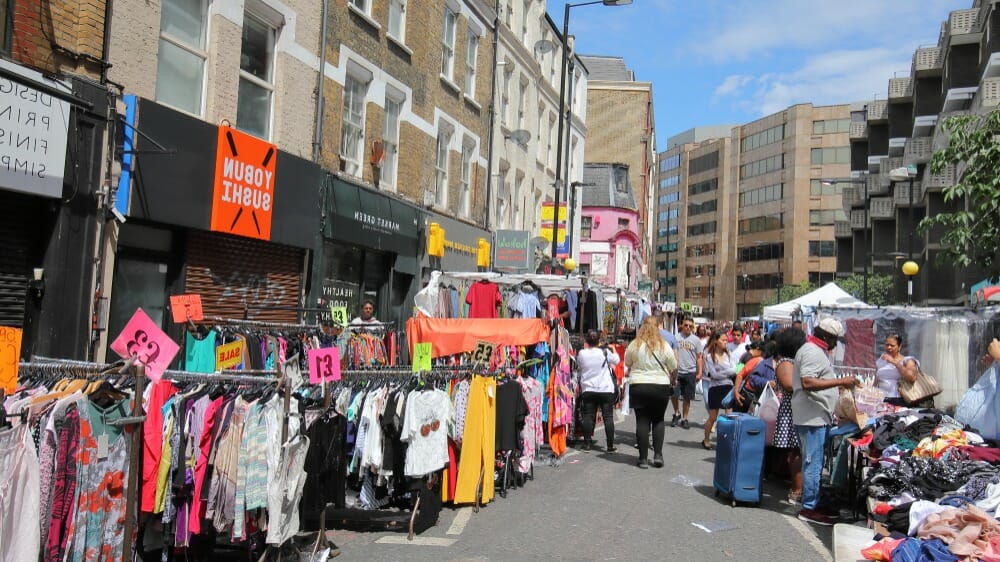 This market is located in the Spitalfields area of East London and is known for being one of the city’s oldest markets.

The street Petticoat Lane actually got its name from prudish Victorians avoiding references to undergarments; it was renamed Middlesex Street in 1846.

The market is only on Wentworth Street from Monday to Friday, but it spreads out much further and attracts more traders on Sundays.

Initially, Petticoat Lane was known for selling fashion and clothes – leather goods being a particular speciality.

It currently sells just about everything, including designer apparel, perishable products and a variety of electrical products.

As a result, it’s an excellent spot to look for deals and discover some hidden gems. Even if you don’t want to spend any money, the variety of vendors and goods being offered makes it an exciting place to explore with a lot of different things to see.

It’s also in one of London’s most fashionable districts (Spitalfields/Shoreditch), which offers a diverse range of local independent cafés and eateries specializing in a variety of cuisines.

This is why it’s the ideal place to satisfy your hunger pangs with a quick coffee or light meal.

History and heritage lovers will enjoy the market as well.

It’s located in a place with a long and illustrious history that is worth seeing when strolling around, just like many other parts of London.

So, if you find yourself bored while shopping and you desire some culture instead, remember that with every step, you are experiencing one of the oldest markets in Britain.

Explore the area and enjoy all that London’s historic streets have to offer. 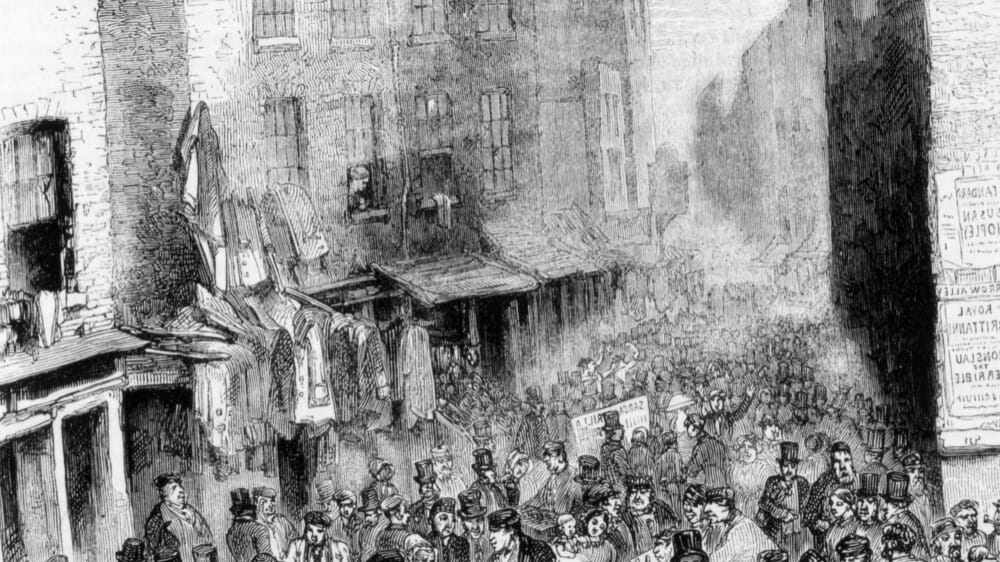 Petticoat Lane’s original name was Hogs Lane, and some experts believe this dates back to the Tudor period.

Pigs were kept by bakers on Hogs Lane many centuries ago, which is likely how the street got its name.

Alternately, the name may reference a road that was once used to bring livestock into the city.

By the 17th century, London was booming and rapidly expanding.

This growth set the precedent for the Industrial Revolution, as London became increasingly commercialized with different businesses and housing popping up all over the city.

The street’s shift from Hog Lane to Petticoat Lane (originally Peticote Lane) is thought to have taken place during this time, owing to the area’s reputation as a marketplace for traders who sold clothing and other goods.

The perpetuation of this industry practiced in Spitalfields can be traced back to the Huguenot weavers who escaped Catholic persecution by relocating to London.

Huguenot Weavers were French silk weavers from Lyon and Tours in southern France who belonged to the Calvinist religion.

This helped solidify the market’s reputation as a place for textile manufacturing and commerce, and it laid the groundwork for the market’s present-day image.

The nineteenth-century saw the market become one of the city’s most well-known landmarks – for both its legal and illegal activities. Although it was primarily known as a place for making quick money, it also attracted criminals and other dubious activities like petty theft and prostitution.

There was even a popular adage that claimed that at one end of the market, someone would steal your petticoat, and then sell it back to you at the other.

There was one particular location known simply as “The Lane” which was said to be populated by fences.

These people were knowingly buying and selling stolen goods for a profit.

The most famous case of this is the character Fagin from Dickens’ Oliver Twist.

Because of this, the market was not the safest area to be; and it was in the midst of where Jack the Ripper worked.

The area was considered dangerous and rundown because it was crowded and unsanitary, conditions that “respectable” people avoided. 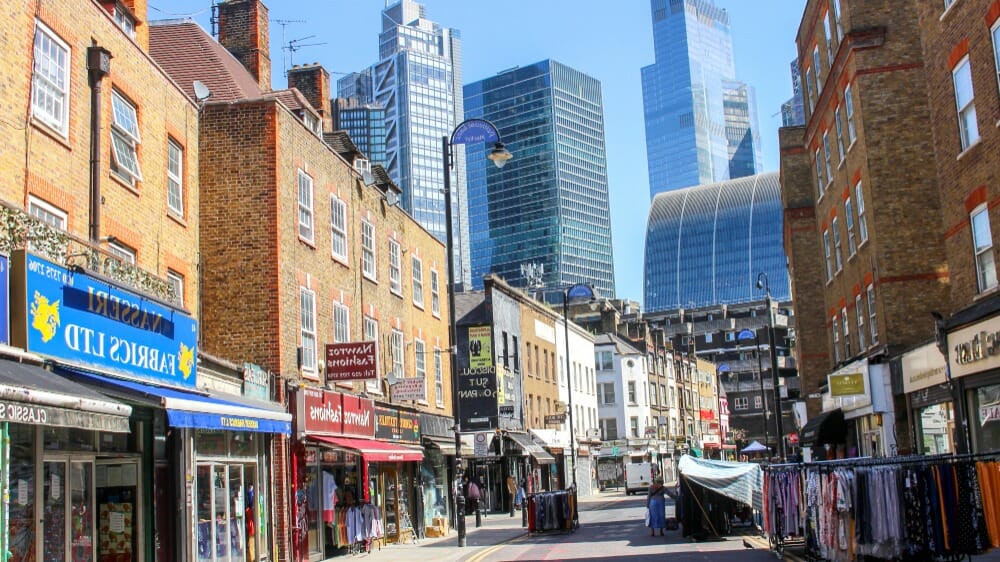 Fortunately, today Petticoat Lane is a safe and enjoyable destination.

We’ve compiled a short list of tips to make the most out of your visit.

If large crowds bother you or if you prefer a calmer experience, it’s best to visit the market during the week instead of the weekends.

Although Petticoat Lane Market has a lot to offer, it can be too much for some people, so it’s best to make a plan.

Decide what you want to buy, how much money you’re willing to spend, and if you’re open to negotiation before leaving for the market.

Many vendors will be willing haggle on price, but not all of them are negotiable.

Try to assess the situation before you negotiate and try to get some bargain prices.

Although it is rare, pickpocketing and mugging do happen in London from time to time. To decrease your chances of becoming a victim, keep valuables close to you at all times- stored in zip-up pockets if possible- and be extra vigilant when going through high foot traffic areas.

Be on the lookout for strangers who ask you for directions or try to engage you in confusing conversation – this is frequently a diversion tactic.

How to Visit Petticoat Lane Market

The surrounding streets of Petticoat Lane are great to browse through too.

For those that want to pick up a bite to eat, the market has many street food sellers that operate 7 days a week.