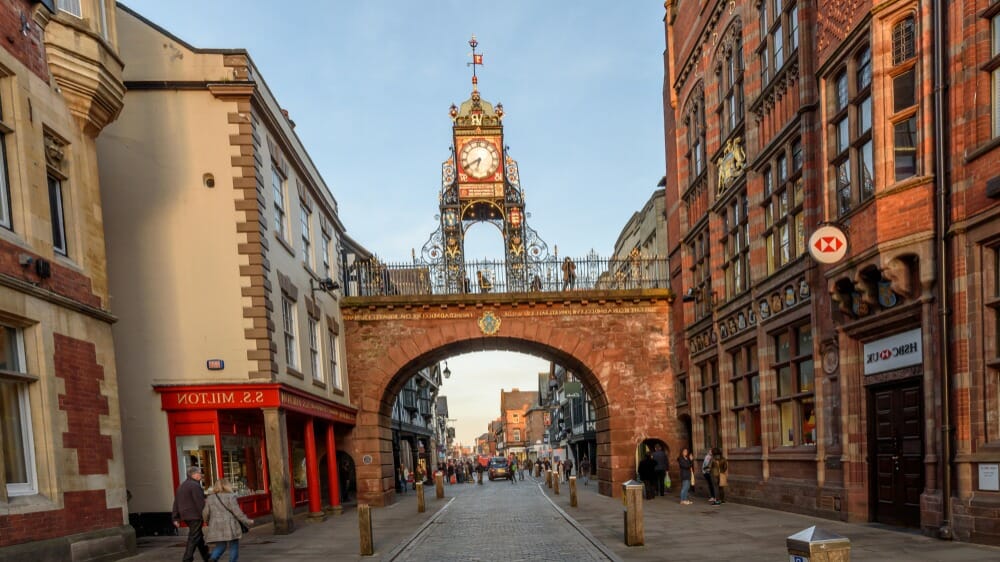 Chester is a cathedral city located on the River Dee.

It was established as the Roman fort of Deva Victrix in AD 70 on the border with North Wales and is one of Britain’s oldest cities.

The two largest streets in Chester, Bridge Street and Eastgate, were once the roads that led into Roman Chester.

Chester is a wonderful historic city with many attractions and makes a great place to visit all year round.

Things To Do In Chester 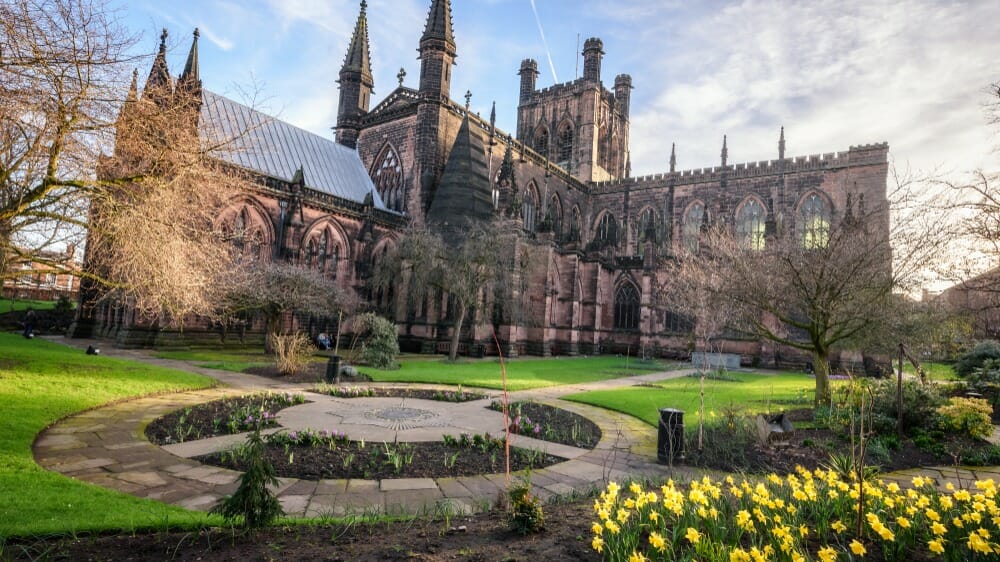 Chester Cathedral is the must-see attraction when city sightseeing in historic Chester.

The construction of Chester Cathedral spanned over 500 years, from the 11th to 16th centuries.

As a result, the construction demonstration features a wide range of medieval English architectural styles, including Norman Romanesque and Perpendicular Gothic.

The north transept and northwest tower are the oldest parts of Chester Cathedral, both originating from the 11th century.

Chester Cathedral tower tour is one of the best things to do in Chester as visitors can climb right to the top of the central tower to experience a stunning view.

Outside, you may walk through the cloisters to view an 17th-century Mortlake tapestry on the refectory wall.

Visitors can enter the Cathedral for free but there is a charge for the tower tour. 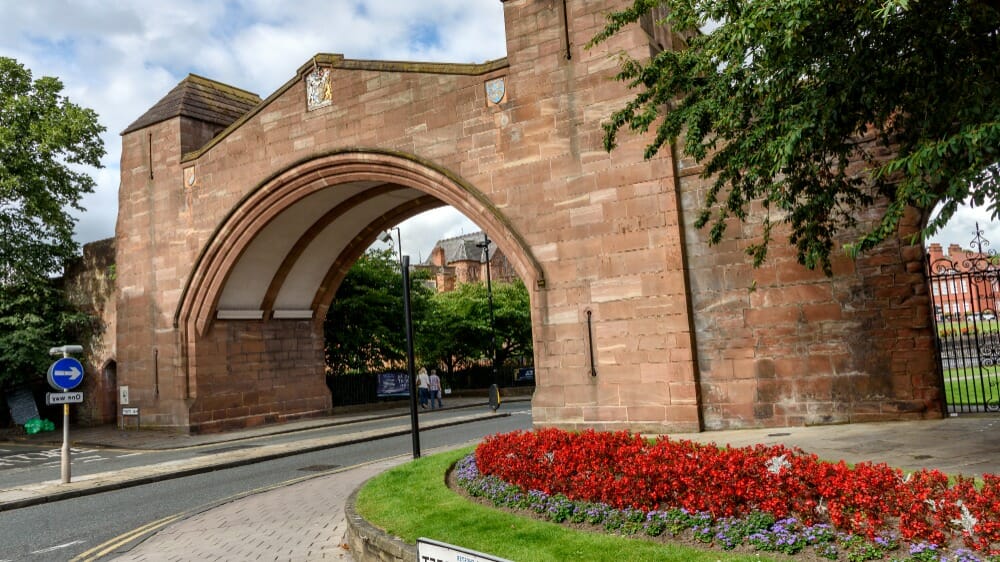 Chester City Walls were first built by the Romans nearly 2000 years ago and are about two miles long, they are also the oldest, longest and most complete in Britain.

The only defences rebuilt during the 10th century in Chester were the south-eastern ones so that they could extend to the River Dee.

The walls can be accessed via the four main gateways that are Bridgegate, Watergate, Eastgate where the World famous Eastgate clock is, and Northgate.

The Roman walls create a pleasant walk around the old city centre and allow visitors to explore Chester’s rich history. 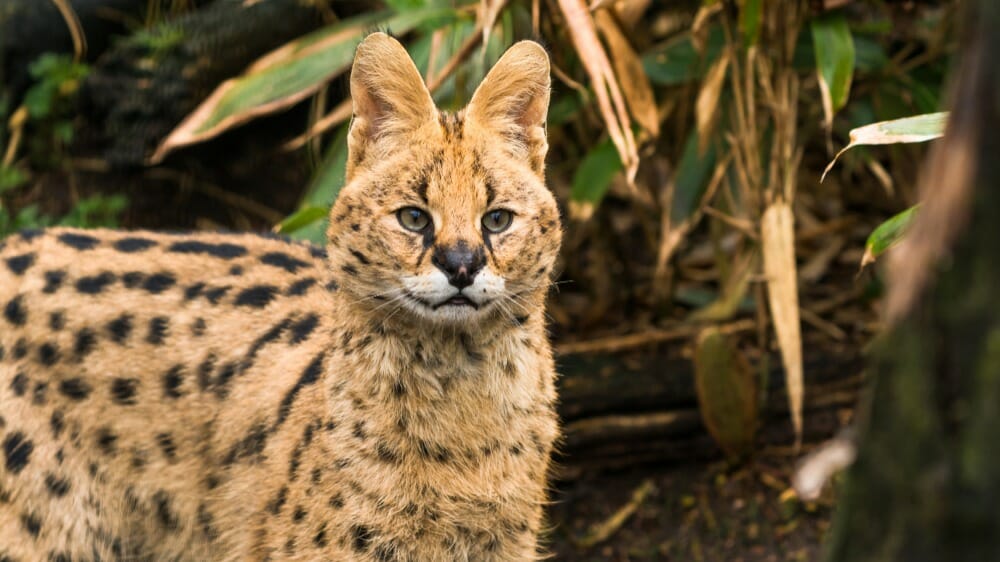 Chester Zoo is home to over 15,000 animals from over 500 species and is set in 125 acres of zoological gardens

The Islands Boat trips are definitely worth doing and are included with your zoo admission.

If you’re looking for other amazing places to see, you can’t go wrong with Tsavo Black Rhino Reserve, Bears of Cloud Forest and the Realm of the Red Ape with Bornean Orangutans.

Chester Zoo also has plenty of food outlets serving snacks and hot drinks, and there are lots of picnic tables available.

Great for a family day out, Chester Zoo is open daily and tickets can be bought online. 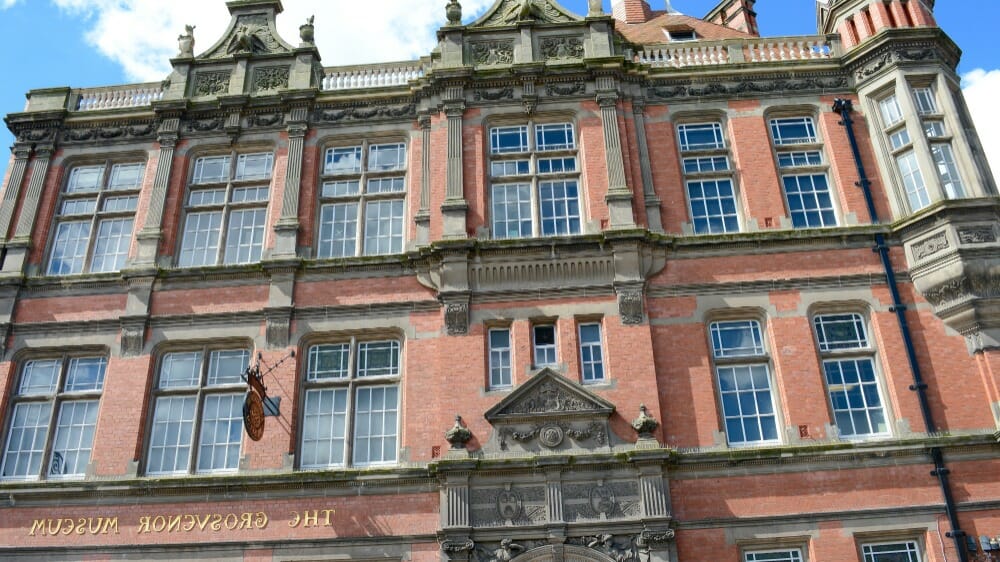 The Grosvenor Museum has collections exploring the history of Chester.

Visitors can find out about life during the Roman times and visit a Period House, with rooms full of displays from the 17th century up to the 1920s.

The Grosvenor Museum has interactive exhibits discussing the area’s natural history as well as a year round programme of special changing exhibitions.

The Grosvenor Museum is good for anyone interested in history and Chester’s heritage, it is free to enter. 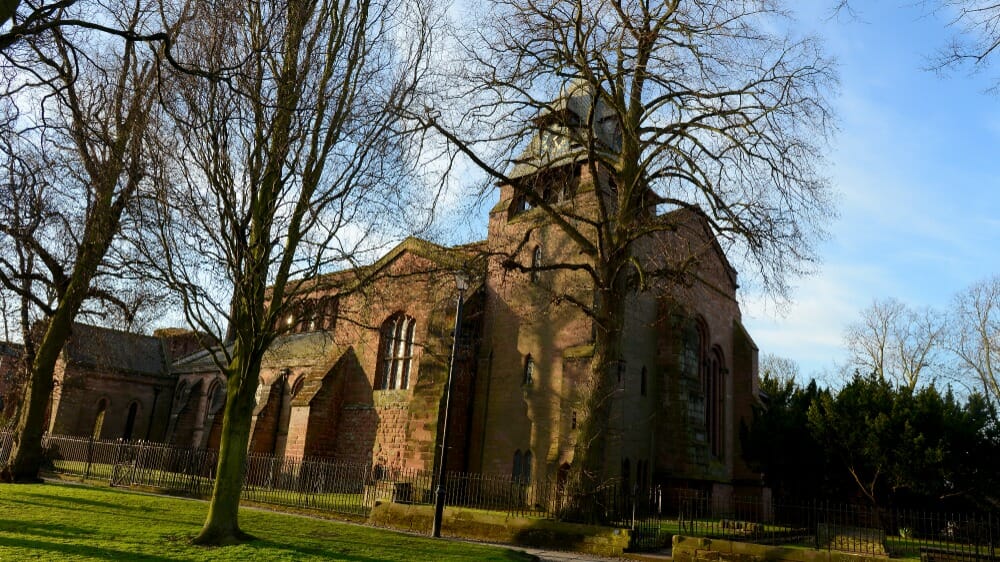 A medieval church with Anglo-Saxon roots, St John the Baptist’s Church is perched on a cliff overlooking the River Dee to the east.

The features that are Norman Romanesque include the nave, first bay of the chancel, the Lady Chapel, and the ruins of choir chapels.

The pieces of Saxon stone crosses that may have been erected in the yard, and the beautiful stained glass windows from the mid-19th century can be seen inside the church.

The church is a local landmark and well worth a visit. 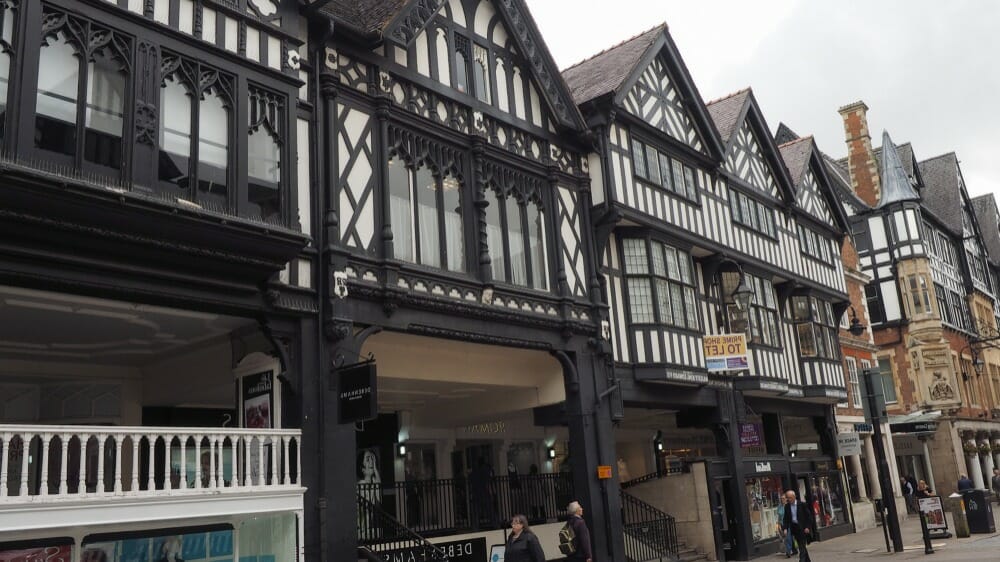 The Rows in Chester, England are a series of walkways set above street level that are covered in timber and glass.

These beautiful galleries lead you past shops on your way through the old centre of town.

The Chester Rows are thought to have origins in the 13th century, but they have been added to and rebuilt over the following centuries.

They are presumed to have been constructed to increase the amount of retail space in the heart of the town.

The Chester Rows are quite unique and provide a wonderful atmospheric opportunity to shop in the variety of retailers along the walkways. 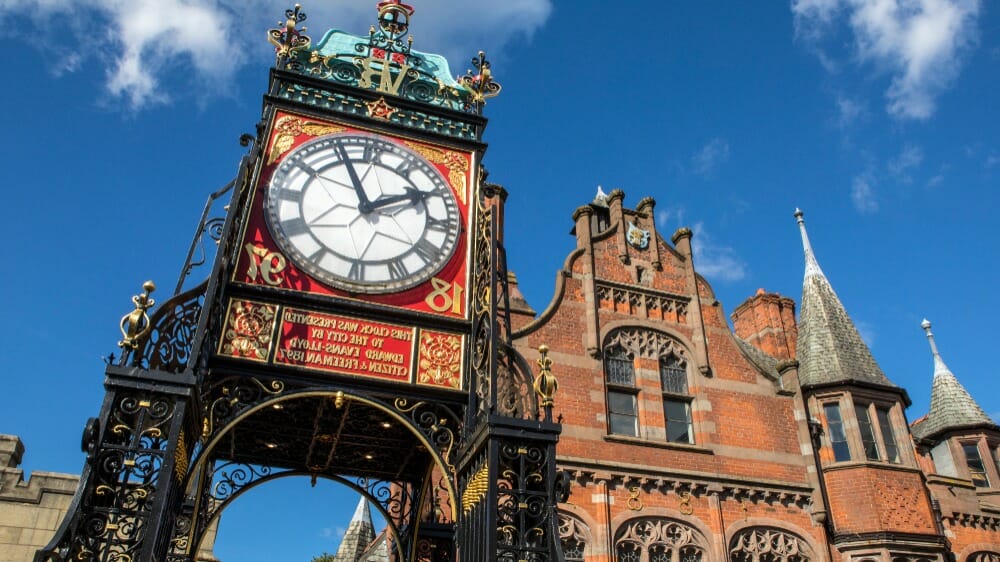 The Eastgate Clock is a turret clock built above the Eastgate of the ancient walls of Chester and is one of Chester’s most popular tourist attractions.

The gate is made of sandstone from 1768, and there is a wall walk on top of it.

There is a clock face on all four sides below the copper-covered ogee cupola.

The clock mechanism was provided by J.B. Joyce of Whitchurch, and it had to be hand-wound once a week up until 1974.

On each side of the face, the Queen’s initials are located. 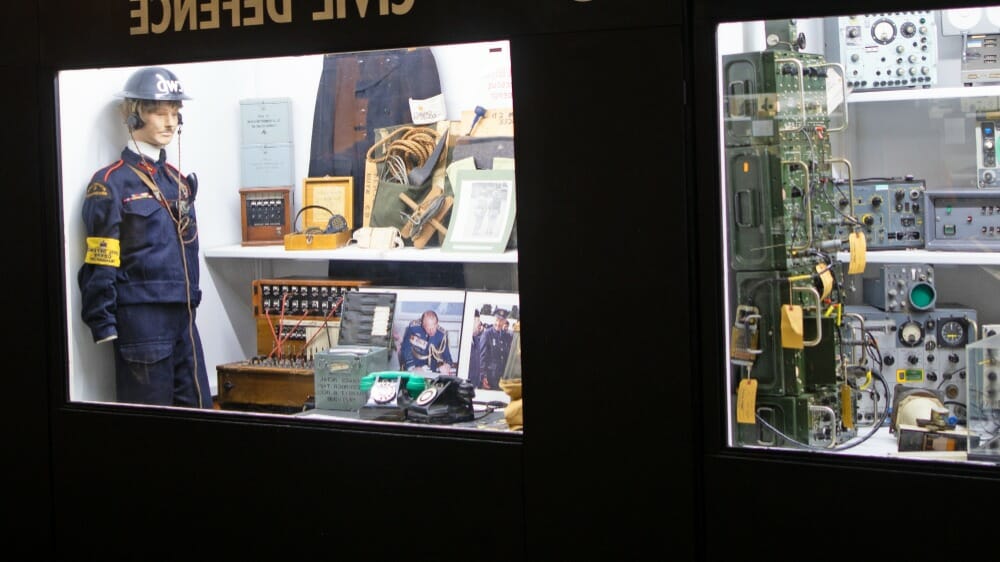 The Cheshire Military Museum tells the military history and stories of Cheshire Soldiers from the 17th Century through to the present day.

Visitors can learn about the wars that they fought and their exploits all over the world.

You get to see true artefacts, pictures, paintings, and an impressive medal collection.

Some of the highlights are the Cheshire Regiment silver collection, a WWII Vickers Medium Machine Gun and items from the German surrender in 1945.

Great for anyone interested in military history and battles. 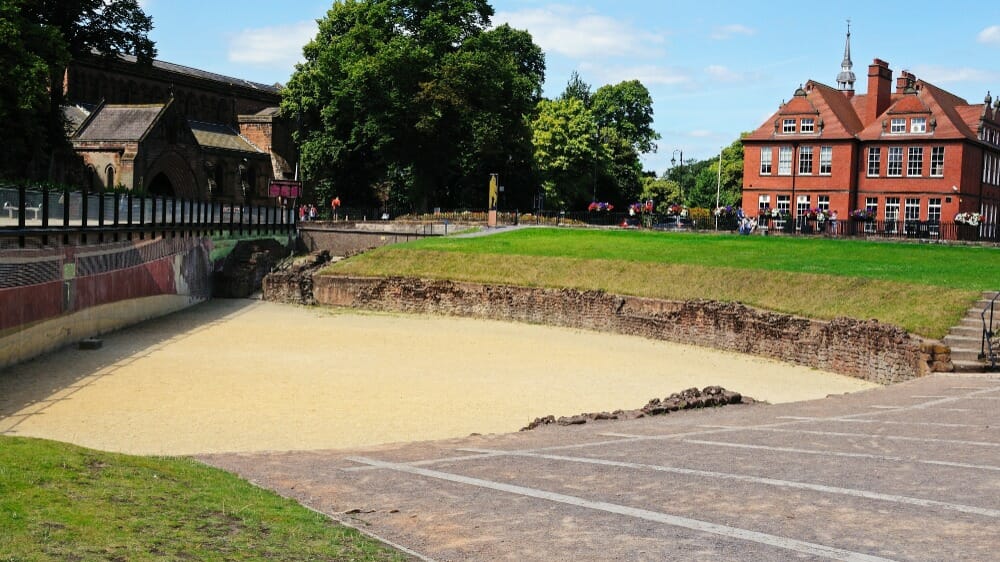 Chester has the largest stone-built Roman Amphitheatre in Britain that is now a designated English Heritage Site and a Grade I listed structure.

A level pavement and footpath allow visitors to see the excavated areas of the amphitheatre and have a clear view down to the site.

Although the central theatre area is only accessible via several steps.

The Chester Roman Amphitheatre is located just outside Chester’s city walls and access is free. 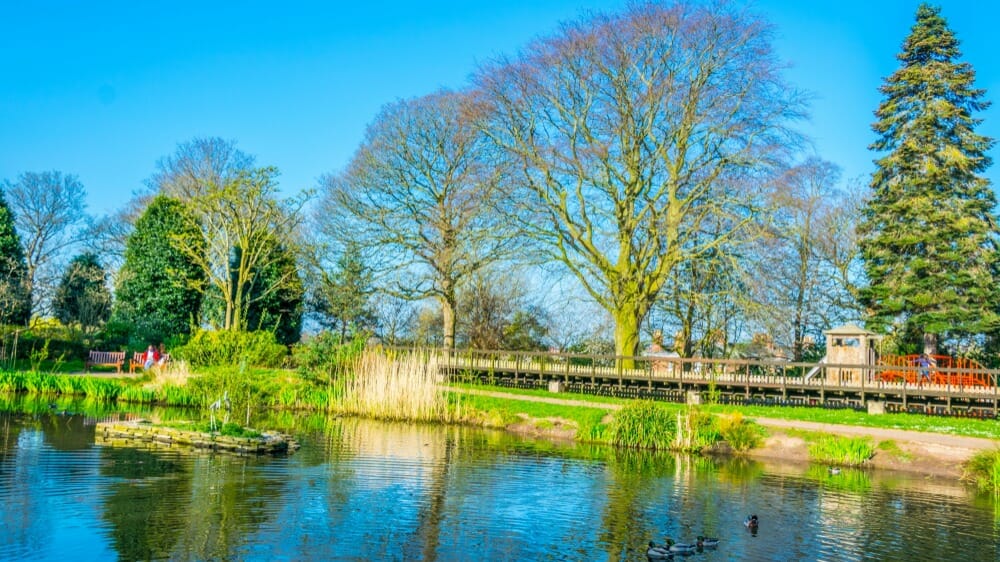 Grosvenor Park is a quaint Victorian park that spans 20 acres of land on the north bank of the Dee.

It’s easily considered one of the best parks from this period in history and was designed by Edward Kemp.

The medieval-style drinking fountain with its stone arch from Chester’s St Michael’s Church and the Grade II listed Jacob’s Well are two of the many classic and picturesque features.

The miniature railway which runs on weekends and every day of the school holidays, is great for kids.

Lastly, for parents with young children, there is an activity zone and a great play area.

The park is home to the lodge which has a cafe and one of the UK’s top open-air theatres that have professional productions running from July to August. 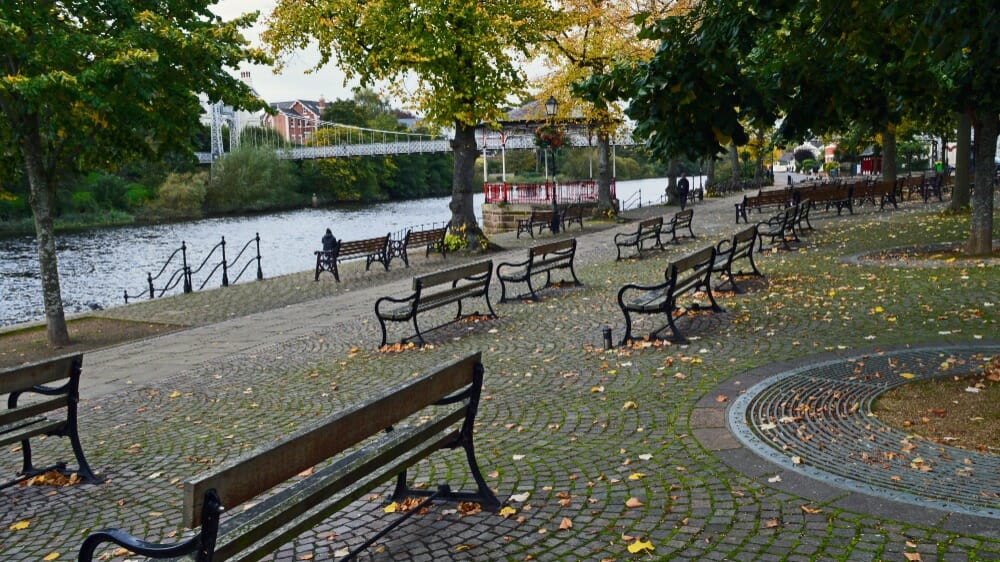 If you’re looking for a serene and beautiful place to take a walk, The Groves is definitely the spot for you.

Located right next to River Dee, this lovely promenade spans from Lower Bridge Street all the way to Grosvenor Park.

Taking a stroll through Queen’s Park will allow you to admire the Georgian houses and get a glimpse of the opulent mansions across the river.

There are historic iron gaslights, pubs and numerous benches where you may rest and admire the swans.

If you’re a photographer looking for breath-taking scenery, the Queen’s Park Suspension footbridge at The Groves is definitely the place for you. 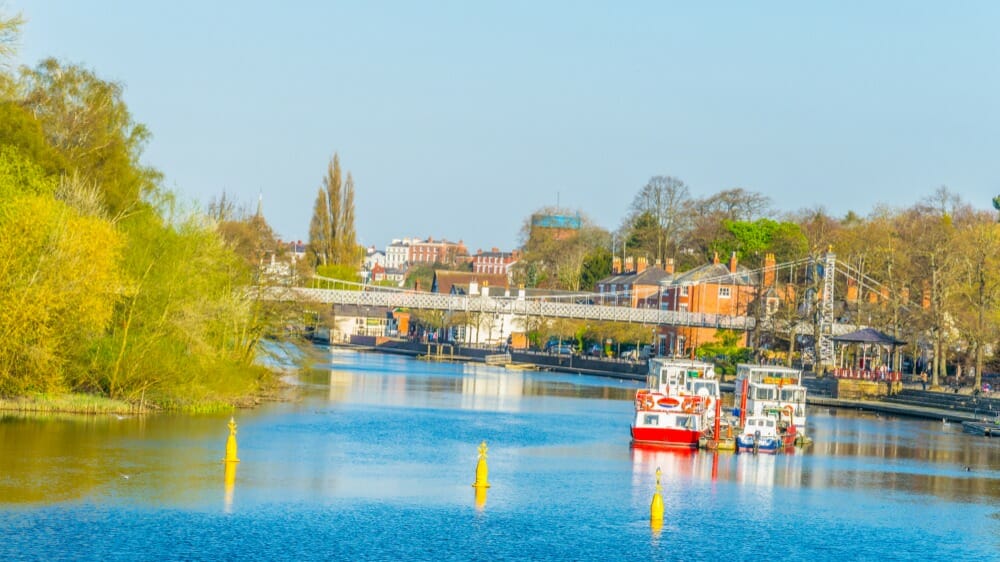 The River Dee is 5 minutes walk from the city centre and can be accessed from Grosvenor Park and also Chester City Walls.

Chester’s river is especially inviting on warm days, and along The Groves a few companies offer cruises.

A casual ride will take you east, under the Queen’s Park Suspension Bridge, past stately lakeside homes to Chester Meadows on the town fringe, and back again, all within 30 minutes or so.

While you float down the river, listen to a commentary about all of the wonderful monuments and animal life that surround you.

If you’re looking for a more tranquil experience, consider renting yourself a private vessel.

The Groves also offers pedalos and kayaks for those who want to explore the river up-close. 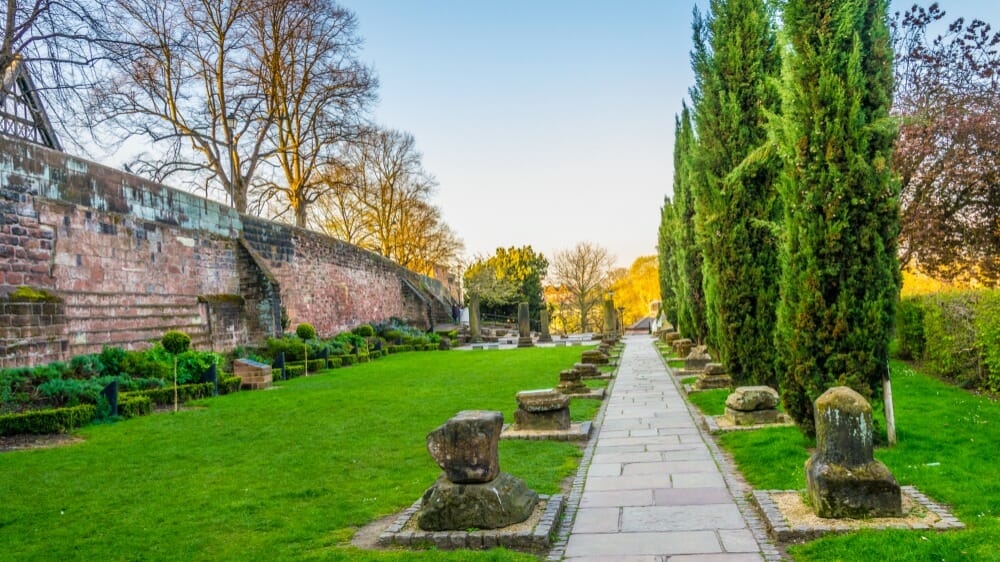 Chester Roman Gardens are located just outside the city walls near the Chester Amphitheatre.

Originally designed in 1949, the gardens were designed to showcase a number of artefacts from the city’s Roman occupation past.

The gardens contain a preserved slice of Roman history and display ruins from the Roman fortress of Deva.

There are several columns from the Roman gymnasium, which were nearly two meters tall when they were originally erected.

The tallest column in the garden is from the Principia building, which is now Chester Cross.

The Gardens are open daily from 9am and provide a interesting setting to browse the Roman ruins and relax amongst the city’s busy streets. 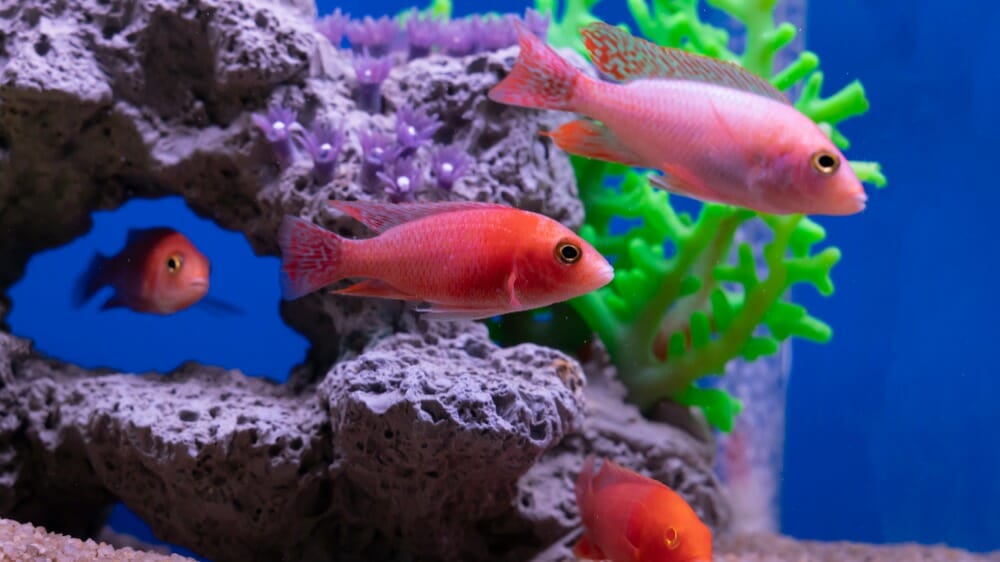 One of Chester’s top attractions, the Blue Planet Aquarium is located next to the Cheshire Oaks Outlet Village.

This marine and freshwater aquarium is home to more than 100 living displays, including one of Europe’s largest shark collections.

Great for families, the Blue Planet Aquarium offers some interesting exhibits for all ages.

Some of the best include the Flooded Forest exhibit and the Northern Streams exhibit that introduces wildlife that can be found in Britain.

There is also the Lake Malawi exhibit and the Frog Zone, which is home to some of the world’s most unusual and colourful species of frog.

The underwater shark tunnel is exciting as you watch various sharks and fish swim over your head.

Blue Planet Aquarium is open everyday, with opening hours from 10am until 5pm and tickets can be purchased online.

Is Chester worth visiting?

There are many things to do in Chester, from Chester racecourse to the magnificent city walls, to a 1000-year old cathedral, a beautiful river, and Roman gardens, Chester City has it all.

What is the Chester treasure hunt trail?

Great to do with family and friends, you can follow the route and solve the clues.

The trail starts in the city centre at The Cross and follows along the 2 mile circular Trail route that explores Chester’s quaint streets and Roman walls.

Where is the Chester Ice Cream Farm?

The Ice Cream Farm is located in Tattenhall, this is a village not far from Chester.

The farm makes more than 40 flavours of ice-cream, and has kids play areas, farm animals and quad bikes.

Can you take a day trip to the Lake District from Chester?

Yes, there are many day tours available to visit the Lake District from Chester.

Most can be booked online and there are various pick up points in Chester.

Does Chester have a castle?

Chester Castle was built in 1070

After the civil war Chester Castle was used as a prison, a court and a tax office.

The castle is only open for visitors during special events.