This is a magical city with more to offer than simply beautiful beaches and outstanding nightlife. It’s also a bustling exciting destination with a lot more to discover for visitors than its beaches.

The city’s lively vibrancy derives from its subtropical location and the many cultural traditions it has absorbed.

There are so many great things to do in Miami Florida it’s hard to list them all.

Things To Do In Miami 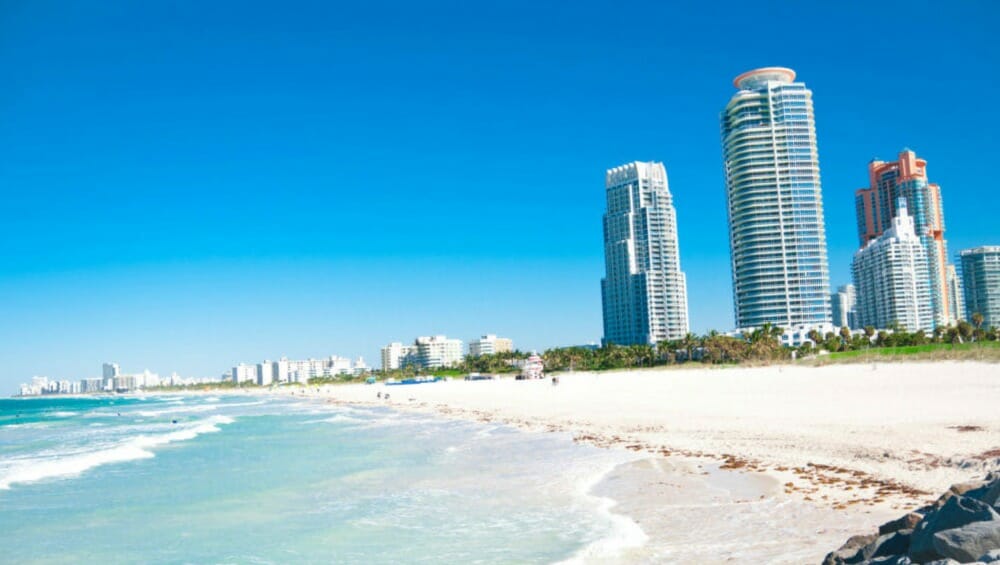 South Beach is a neighborhood in Miami Beach. It is sometimes nicknamed SoBe for short.

It is located on the southernmost portion of the barrier island known as Miami Beach.

The area encompasses all of the barrier island that separates Elliott Key from the mainland.

South Beach was initially populated by Native Americans until the early 1900s when developers began to build resorts and hotels in the area.

The area has become one of the most popular tourist destinations in Florida and is known for its Art Deco architecture, white sand beaches, and luxury hotels.

South Beach is also home to a number of high-end shops, restaurants, and nightclubs.

The nightlife in South Beach is world-renowned and the area is a popular destination for celebrities and wealthy tourists.

South Beach is located just east of downtown Miami and is bounded by the Atlantic Ocean to the east, West Avenue to the west, Indian Creek to the north, and Collins Avenue to the south. 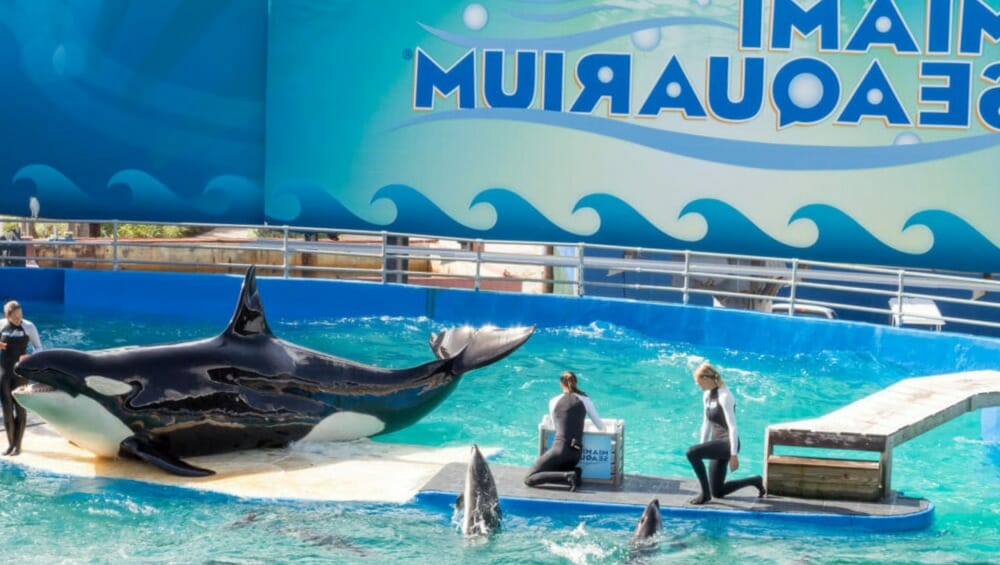 Miami Seaquarium is a popular tourist destination and features a variety of marine life exhibits, including dolphins, sea lions, sharks, turtles, and more.

The park also has a wide variety of educational programs available for both children and adults.

The Miami Seaquarium first opened its doors to the public in 1955. Since then, the park has undergone several expansion and renovation projects.

If you’re looking for a fun-filled day of adventure, be sure to check out Miami Seaquarium!

Bayfront Park is an urban waterfront site, which was built originally in 1896.

Bayfront Park covers 32 acres and is located on Biscayne Bay. It has been expanded over the years and now encompasses 32 acres of downtown Miami Florida.

The city of Miami’s Bayfront Park is a popular location for concerts and holidays, but it’s also a wonderful spot to unwind by the water. 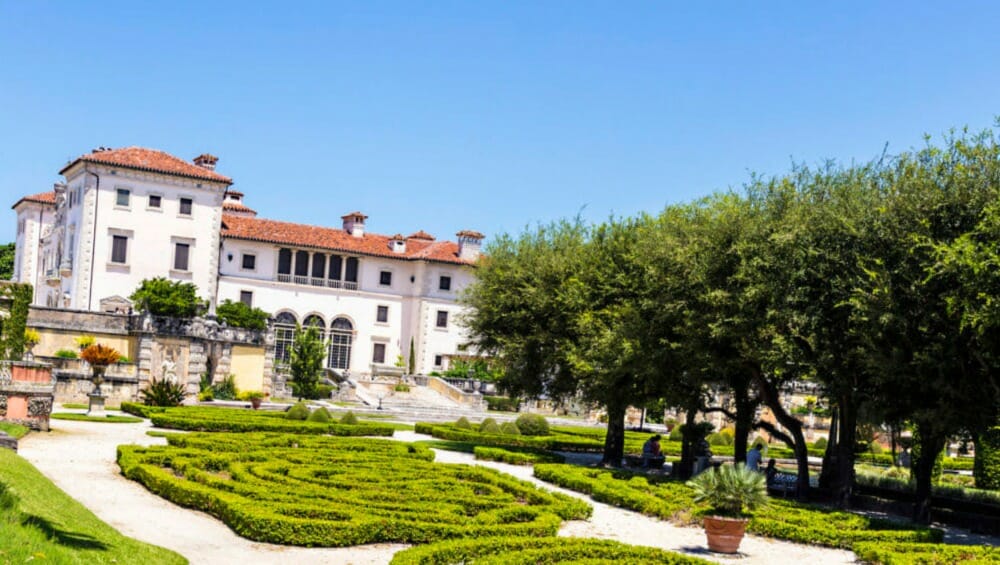 The Vizcaya Museum and Gardens is a stunning estate located in the heart of Miami.

The estate was originally built in 1916 by James Deering, an American industrialist.

The gardens are now a National Historic Landmark and a popular tourist destination.

The Vizcaya Museum and Gardens features 10 acres of lush gardens, including a banyan tree grove, Italian Renaissance garden, orchid house, and many more.

The estate also features a 34-room main house with an art museum, library, and cafe. Visitors can take tours of the main house and grounds, or enjoy a picnic in one of the scenic gardens.

Whether you’re looking for a day of relaxation or a history lesson, the Vizcaya Museum and Gardens is a must-see destination in Miami. 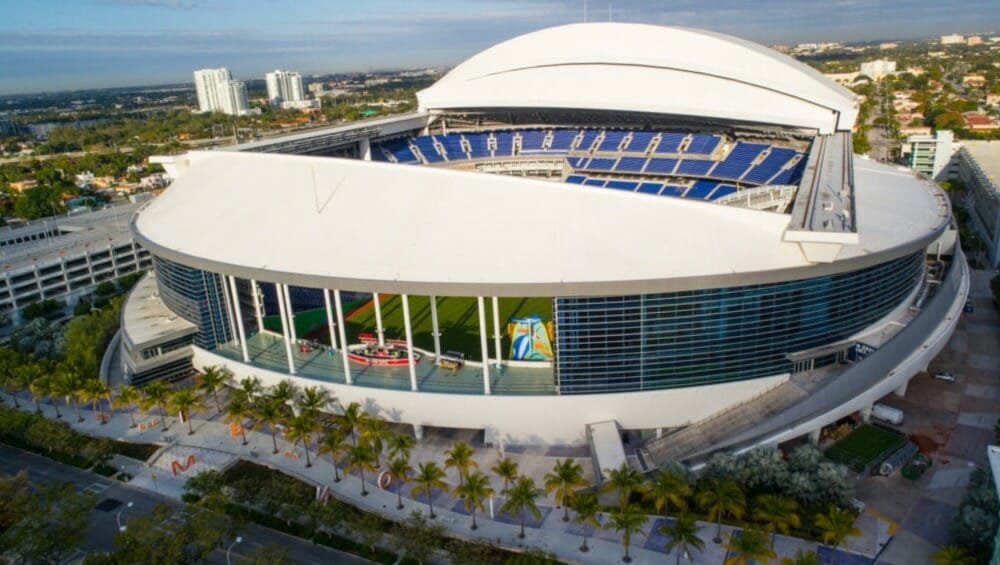 This ultramodern, state of the art stadium is located in Miami’s Little Havana neighborhood.

One of the most important features of Marlins Park is it’s roof system. The three panel retractable roof protects the spectators and players from the sun and rain.

Tickets can be booked online to attend a Miami Marlins game or on non-event days you can take a ‘behind the scenes tour.’ 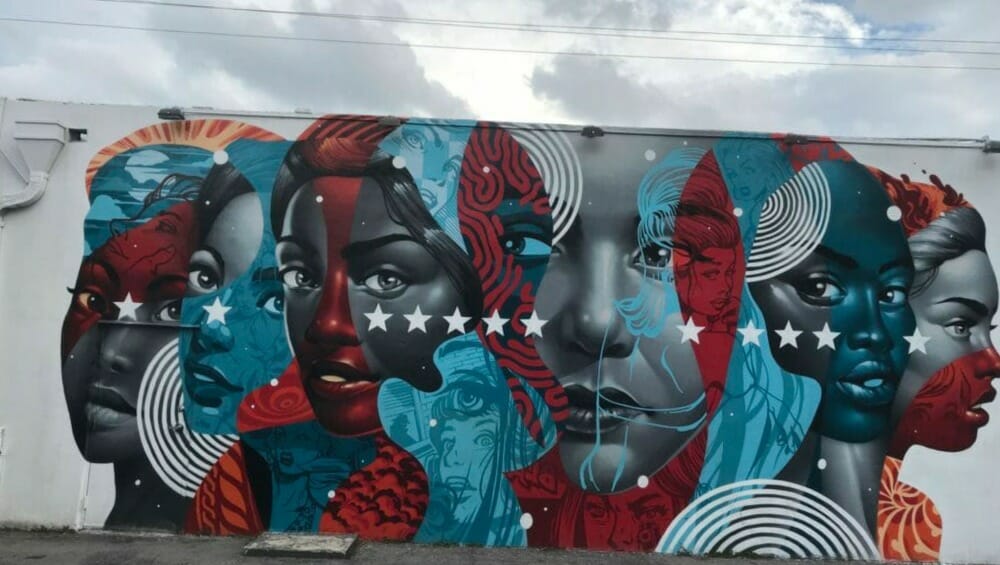 Wynwood Walls is a world-renowned street art destination located in the Wynwood Arts District of Miami.

Wynwood Walls was founded in 2009 by the late Tony Goldman, who envisioned transforming the once blighted industrial district into an open-air museum for contemporary urban art.

Today, Wynwood Walls is widely considered to be one of the most important public art projects in the world.

In addition to its impressive collection of murals, Wynwood Walls is also home to several unique shops and galleries.

The park is constantly evolving, with new murals being added on a regular basis.

Visitors can expect to see something new and exciting every time they visit.

Wynwood Walls is open to the public 365 days a year and is absolutely free to enter.

There is no better place to experience the best of Miami’s vibrant street art scene. 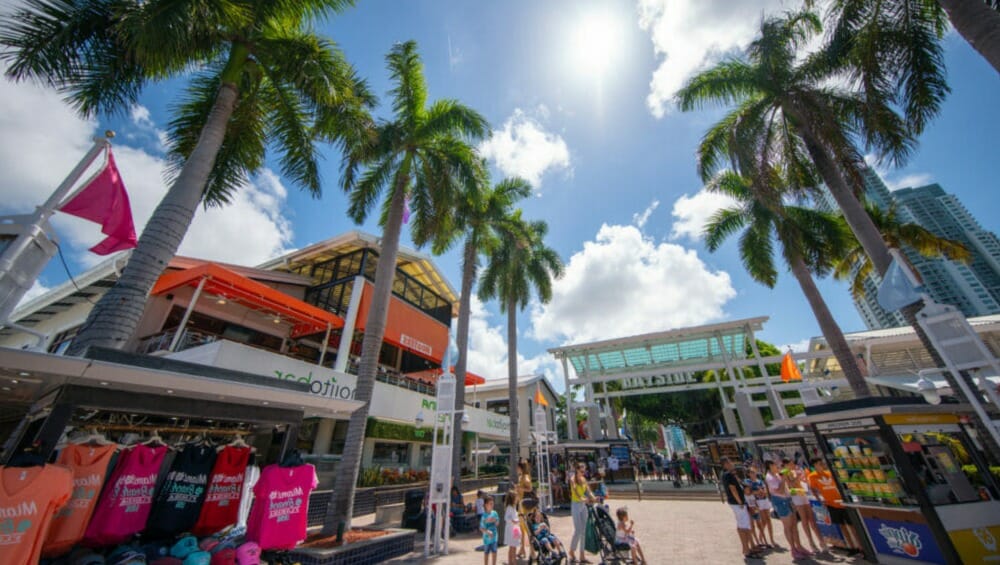 It is located on Biscayne Boulevard, between the Bayfront Park and American Airlines Arena.

Bayside Marketplace is home to over 150 stores and restaurants, including anchor stores Old Navy, Burlington Coat Factory, and Ross Dress for Less.

The mall also features a food court with popular chains such as McDonald’s, Sbarro, and Taco Bell. There are also several full-service restaurants at Bayside Marketplace, such as Hard Rock Cafe and Bubba Gump Shrimp Company.

The mall is popular with both tourists and locals alike. It is within walking distance of many hotels and attractions, including the Port of Miami and American Airlines Arena.

Bayside Marketplace is also convenient to public transportation, with a Metromover station located right outside the mall. 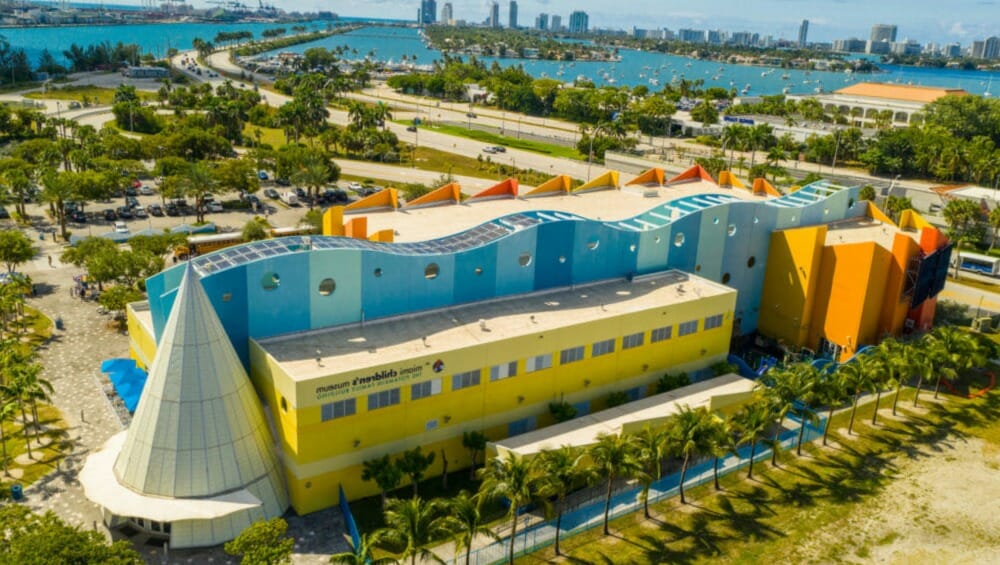 One of the best Miami museums for kids it’s located in Watson Island near downtown Miami in South Florida.

The Miami Children’s Museum is a great place to be educated and entertained at the same time.

It is dedicated to teaching youngsters about the world around them.

The museum houses areas for kids to practice all sorts of activities, such as banking, food shopping, caring for pets and acting as a local cop or firefighter.

The Miami Children’s Museum Sun Dial, the Everglades Park, Peace Park, and Art in Public Spaces are among its four outdoor attractions.

This is one of the most popular Miami attractions for families and can get very busy, however there are areas around the museum to take a little rest. 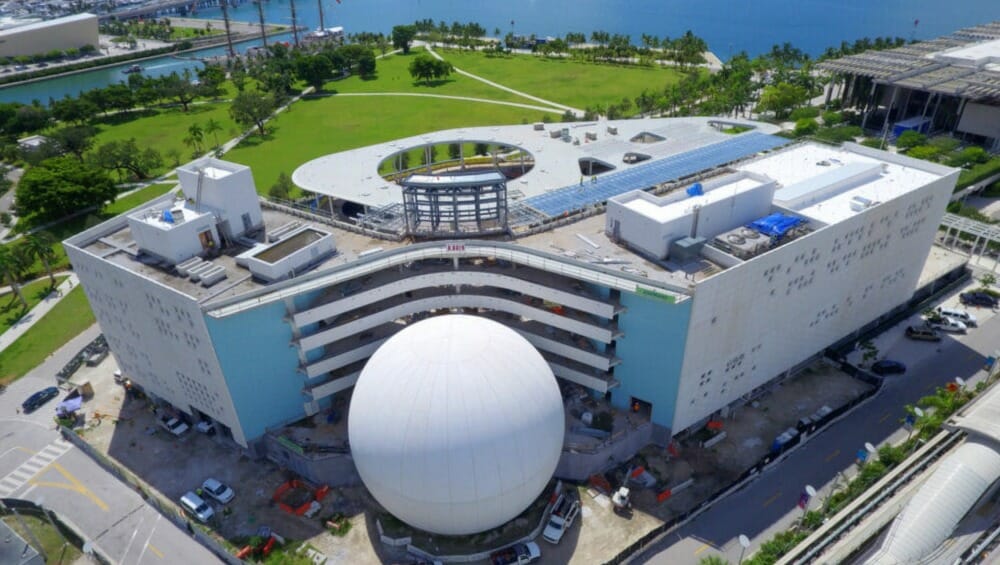 The museum is located in Downtown Miami’s Museum Park and adjacent to the Pérez Art Museum Miami and sculpture garden.

Phillip and Patricia Frost donated $35 million to the construction of the new museum.

The Patricia Frost Museum of science is a world-class museum dedicated to sharing the power of science.

Sparking wonder and investigation, there are fantastic exhibits on six levels inside the north and west wings.

Visitors can hurtle through space in a 250-seat planetarium equipped with a 3-D 8K visual system and come face to face with sharks in the expansive multi-level aquarium.

There is also rooftop observation decks with telescopes for stargazing and an urban garden.

With so much to see and do here you need a whole day to explore! 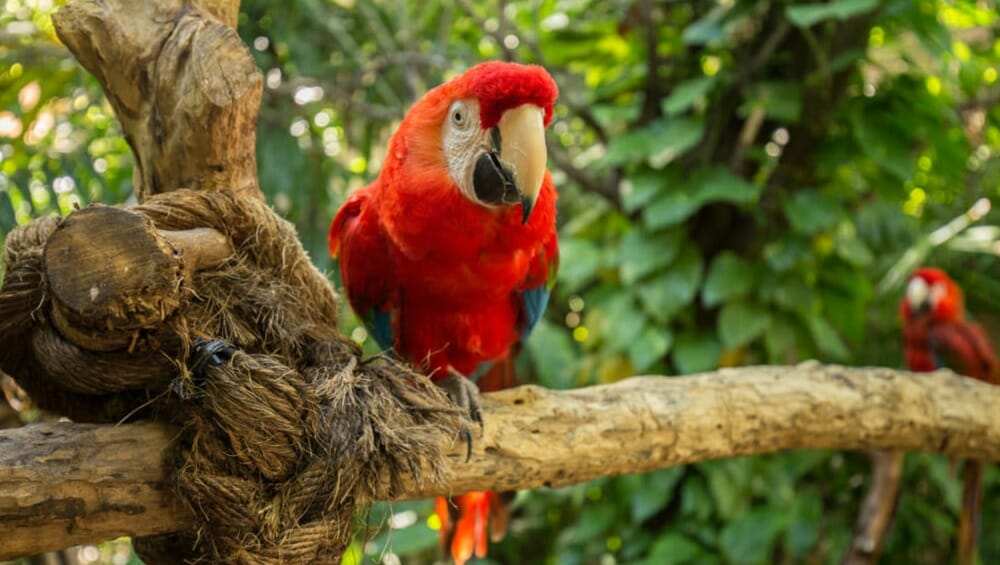 Jungle Island is an interactive zoological park and includes a variety of animal exhibits, educational shows, and recreational attractions.

Jungle Island first opened to the public in 1936 as Parrot Jungle. Since then, the park has undergone several name changes and expansions.

Jungle Island is best known for its bird shows. The park’s trained birds perform tricks and stunts in front of live audiences. The bird shows are a popular attraction for both kids and adults.

In addition to the bird shows, Jungle Island also offers a variety of other animal exhibits and educational shows.

The park’s animal exhibits feature a variety of exotic and domestic animals, including lions, tigers, leopards, and bears.

The educational shows at Jungle Island are designed to teach visitors about the importance of conservation and the proper care of animals.

Jungle Island also features a number of recreational attractions, including a zip line course, a rock climbing wall, and a bungee trampoline.

The park also has a number of restaurants and cafes, as well as a gift shop. 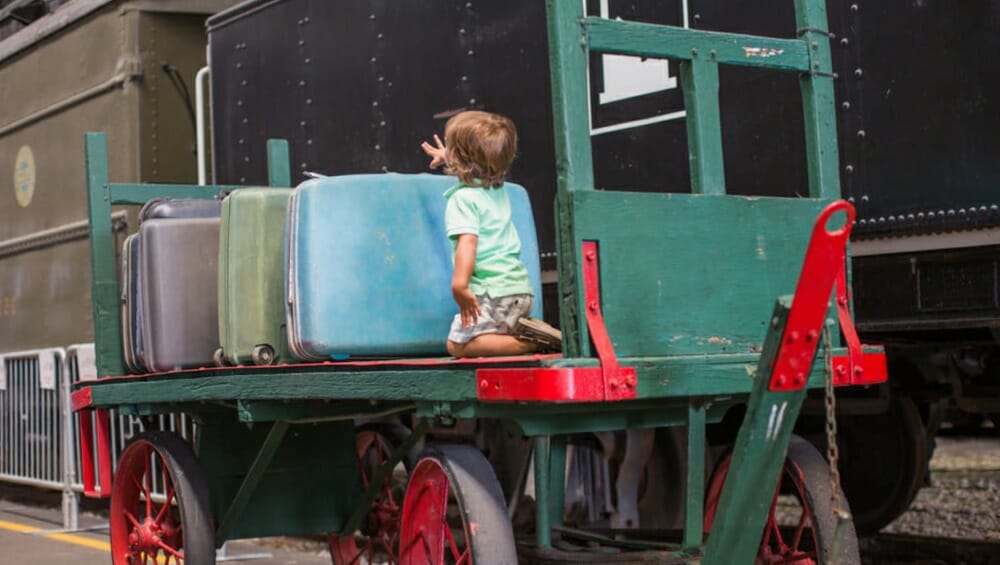 The Gold Coast Railroad Museum is a railway museum and was founded in 1956 by William J. Kersten, Sr., who served as its first president.

The museum is dedicated to the preservation and interpretation of the railroad heritage of South Florida, particularly the Florida East Coast Railway.

The museum’s collection includes more than 50 locomotives and cars, including several from the Henry Flagler era.

The museum is open to the public seven days a week, and offers rides on some of its equipment on select days.

If you’re a fan of trains or history, the Gold Coast Railroad Museum is definitely worth a visit. Located in Miami, the museum houses an impressive collection of locomotives and cars from the Florida East Coast Railway, as well as other railways. 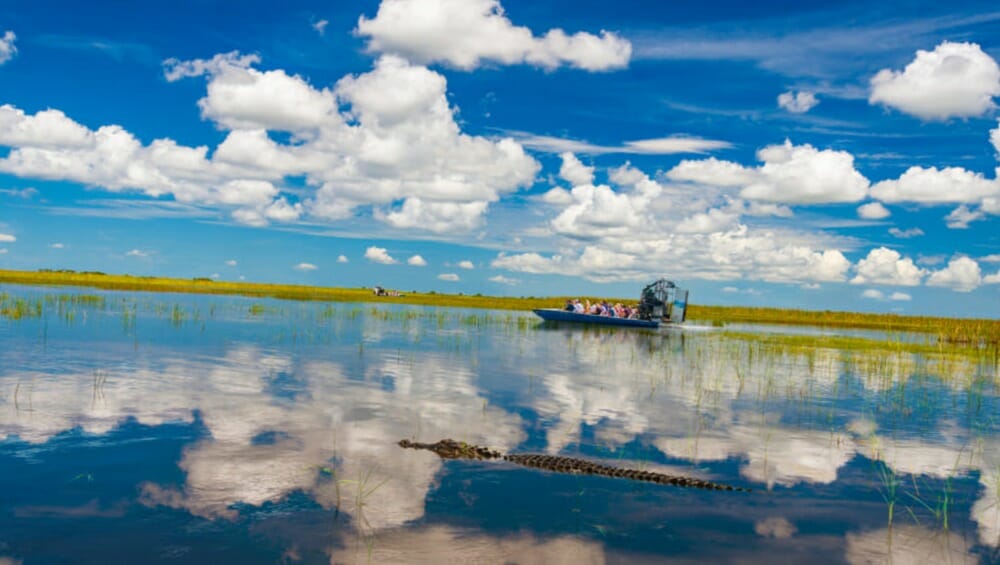 The Everglades National Park is one of the must-see things to do in Miami.

The park is within easy driving distance of downtown Miami and has three separate entrances.

Visitors can explore on foot, on a bicycle and via boat, but there is no public transportation that travels within the park.

The Everglades is made up of coastal mangroves, sawgrass marshes and pine flatwoods.

A classic airboat tour is a great way to explore and can easily be booked online. 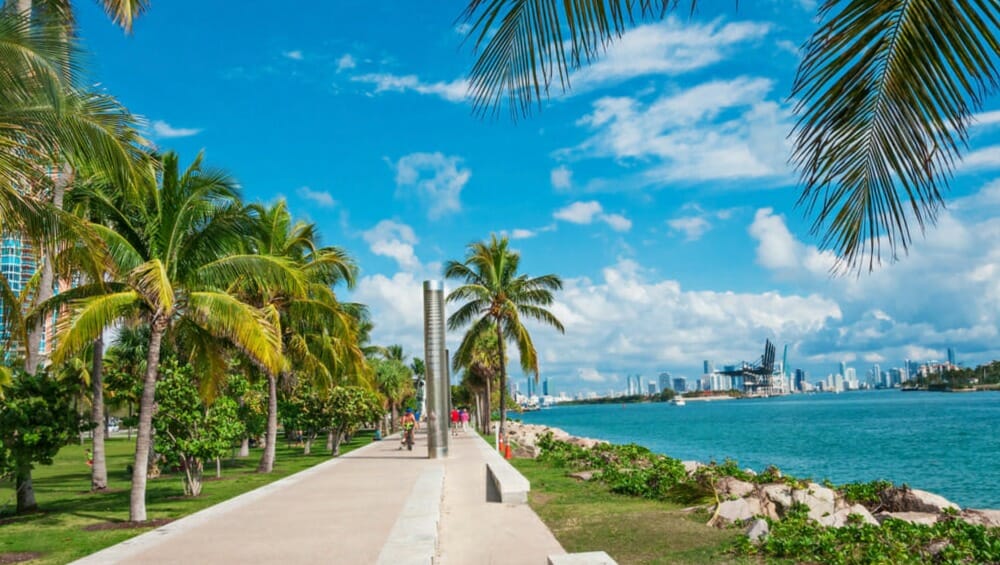 South Pointe Park is one of the most beautiful parks in Miami Beach.

It is located at the southernmost point of the city, next to the famous South Beach.

The park has a large open green space where people can relax and enjoy the stunning views of the ocean.

There are also several walking and biking trails, a playground, and a dog park.

South Pointe Park is the perfect place to take a break from the hustle and bustle of the city and enjoy some time in nature. 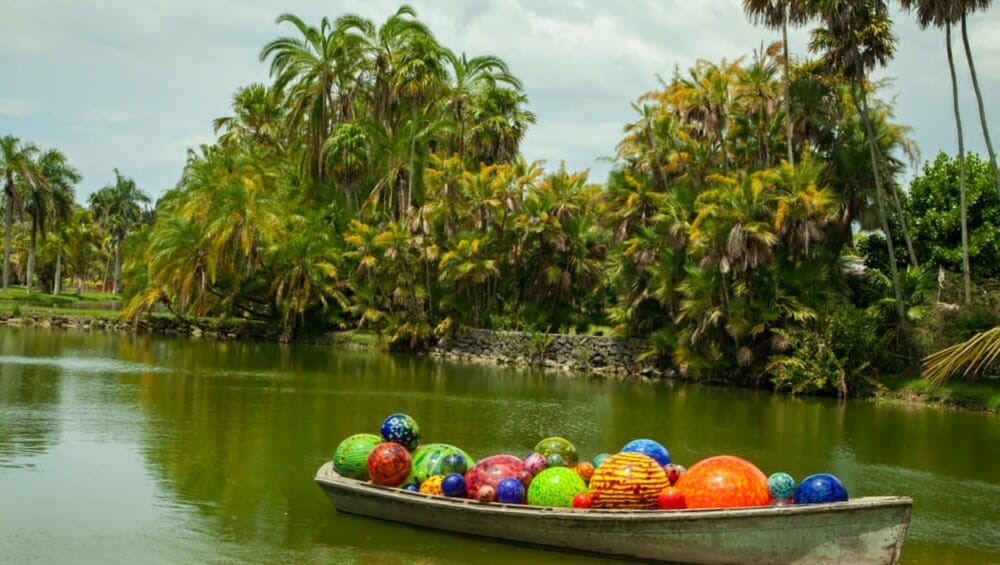 The Fairchild Tropical Botanic Garden has large collections of rare tropical plants with 83-acres to explore.

Fairchild gets its name from one of the most famous plant explorers in history, David Fairchild who was known for traveling the world in search of useful plants.

It is located in the city of Coral Gables, Miami-Dade County, just south of Miami.

The park houses exotic butterfly gardens, an adventure garden for children, a 2-acre outdoor tropical rainforest experience and so much more.

There is plenty of space to have your own picnic.

If you’re looking for a place to eat then there is the Glasshouse café for some delicious food. 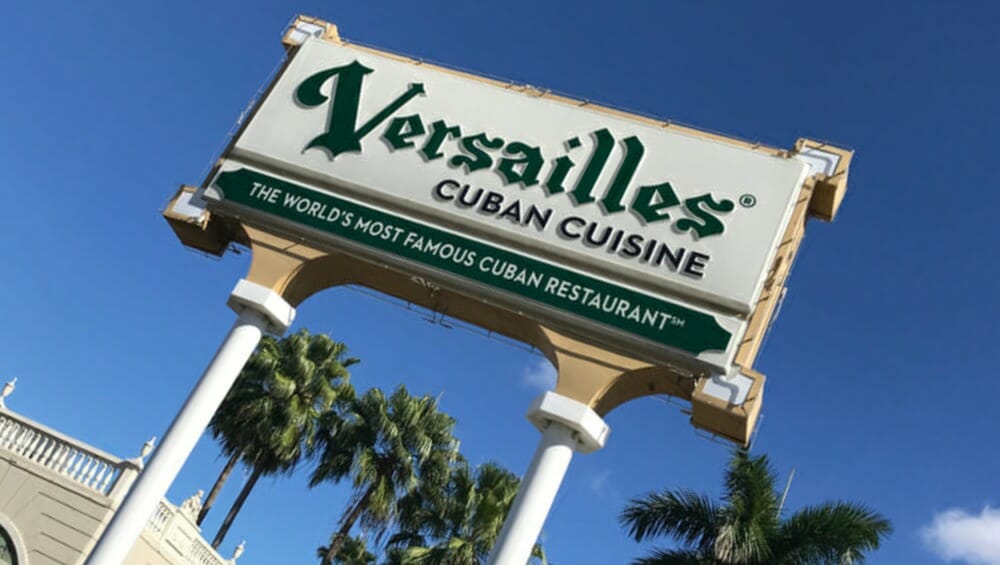 The Versailles Restaurant serves tasty Cuban cuisine and culture to the South Florida community and tourists from around the world.

It has offered traditional cuban culture for five decades.

With amazing food and music, this famous cuban restaurant is well worth a visit.

Is Miami worth visiting?

Miami is a great holiday destination with cultural art, gourmet cuisine and an amazing evening life.

Miami has 3200 hours of sunshine per day and everyone likes to soak up the sun on South Beach.

Does North Miami have a beach?

North Miami Beach has less of the hustle and bustle of South Beach. It has lovely stretches of sand.

The City of North Miami Beach is an urban oasis, located midway between Miami and Fort Lauderdale.

Where is a great place to shop in Miami?

Lincoln Road Mall is a famous shopping mall in the heart of South beach.

What is the Miami Design Preservation League?

This is a non-profit organisation that works to preserve Miami Beach with it’s architectural and cultural identity.

Is the Venetian Pool in Coral Gables, Miami natural?

The Venetian Pool is the only swimming pool that was created from a coral rock quarry in Miami South Florida.

The 820,000 gallon Venetian pool is fed with spring water from an underground aquifer.

What is the Miami Circle?

The Miami Circle is an archaeological site in Downtown Miami.

It is comprised of holes and basins carved into the shallow limestone formation.

The Circle was declared a National Historic Landmark in 2009.