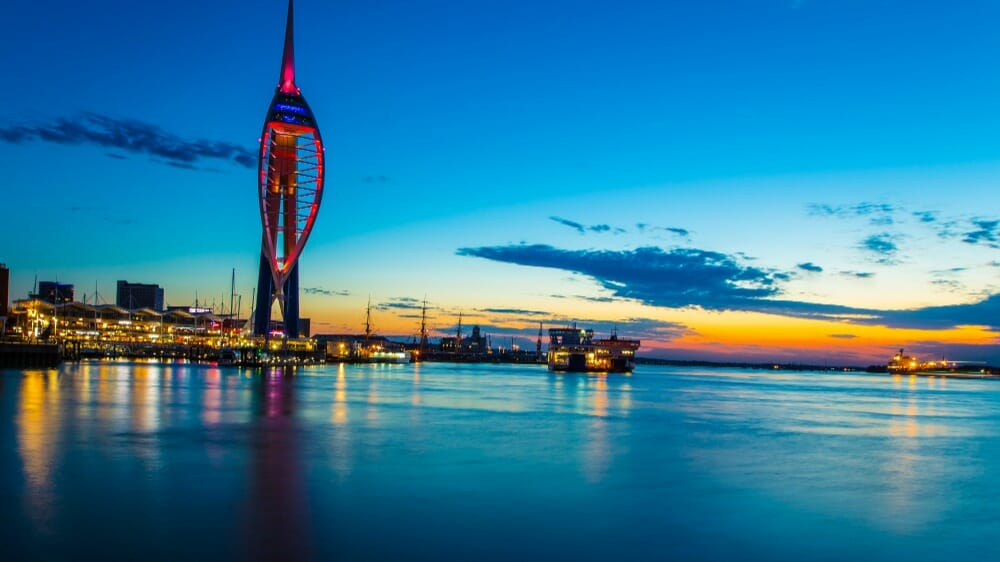 Portsmouth is a beautiful island city located in Hampshire, on the South Coast of England.

The city has a rich history and is home to the British Royal Navy, it is also the birthplace of Charles Dickens, one of the world’s most famous authors.

The city has a lot to offer visitors, including its beach, harbour, attractions and museums.

Portsmouth is also known for its restaurants, bars, live music and nightlife.

There’s lots to see and do in Portsmouth and in this travel guide, I’ll share some of my favourites!

Things To Do In Portsmouth 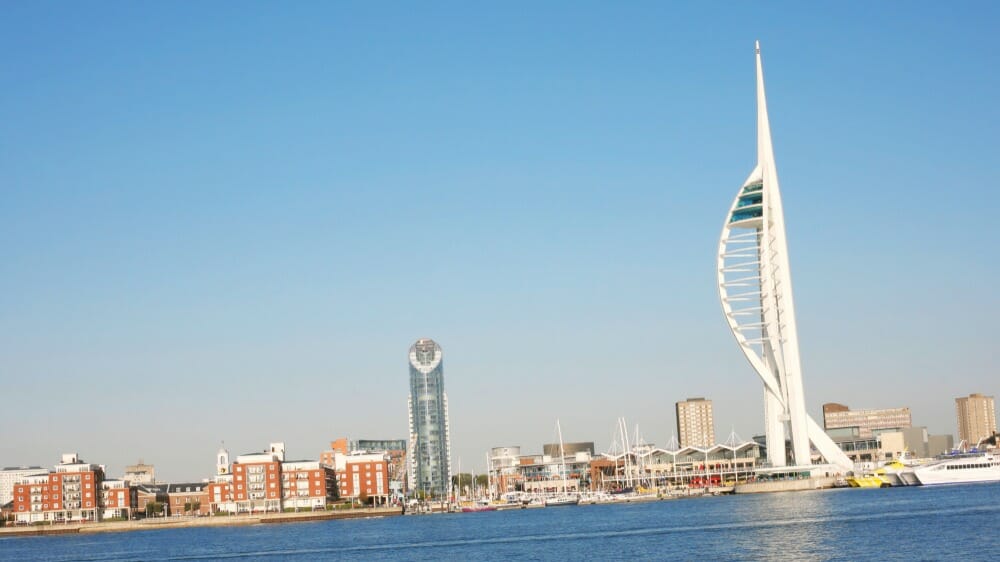 The 170m tall Spinnaker Tower in Portsmouth is a fantastic attraction for locals and tourists alike.

It offers amazing views of the city and its surroundings, and is a great place to spend an afternoon or evening.

The tower was designed by HGP Architects and was built to celebrate Portsmouth’s maritime heritage.

It’s shaped like a spinnaker sail, and has three viewing decks – the 100m Skywalk being the most popular.

The clear floor on the Skywalk deck amazes visitors, who can look straight down to the ground below them.

The tower also has an elevator that takes visitors up to the top deck in just over 30 seconds.

From here, visitors can enjoy panoramic views of Gunwharf Quays, Portsea Island, the Isle of Wight and the surrounding area.

The tower is a great place to take photos, and is especially popular with families. 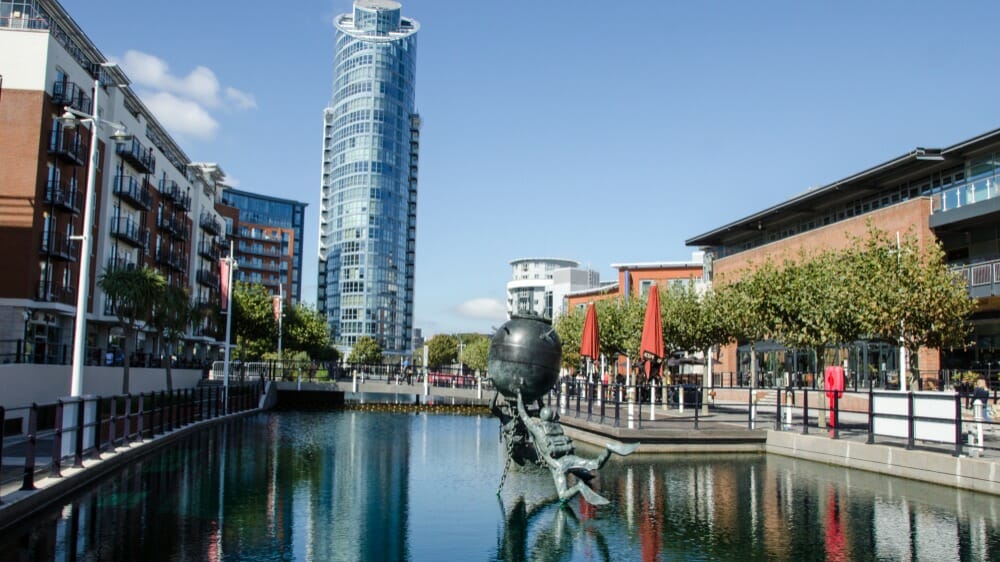 Portsmouth’s Gunwharf Quays is a fantastic location for shopping.

It’s a great place to browse for deals with over 90 outlet stores.

Hugo Boss, Michael Kors, and Polo Ralph Lauren are just a few of the retailers in the Quays.

Gunwharf Quays not only offers fantastic shopping, there is also fine dining, and an array of family restaurants and coffee shops

There’s also a 14-Screen Multiplex cinema, a bowling alley and a Miniport that provides family boat hire to enjoy.

Harbour tours can be taken from Gunwharf Quays that give visitors great views of the Royal Navy’s ships in port, and the Historic Dockyard. 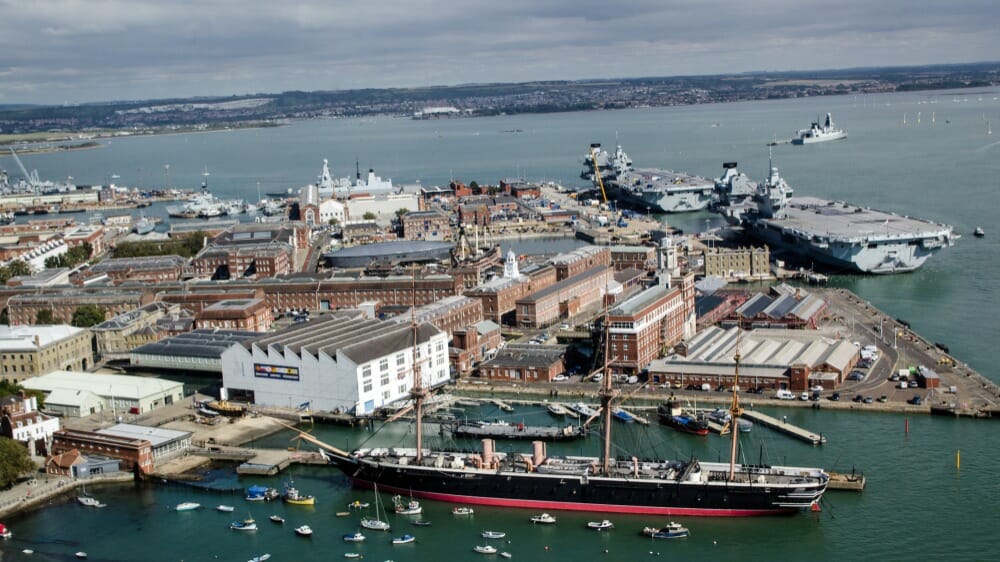 For those interested in the history of the navy, a visit to the Portsmouth Historic Dockyard is an absolute must.

The Mary Rose, the HMS Victory, and the HMS Warrior are just a few examples of the illustrious vessels that have been preserved here over the years.

There is also the option of taking a waterbus across the harbour to Gosport in order to enter HMS Alliance.

In addition to that, this is an excellent vantage point from which to observe the Spinnaker Tower. 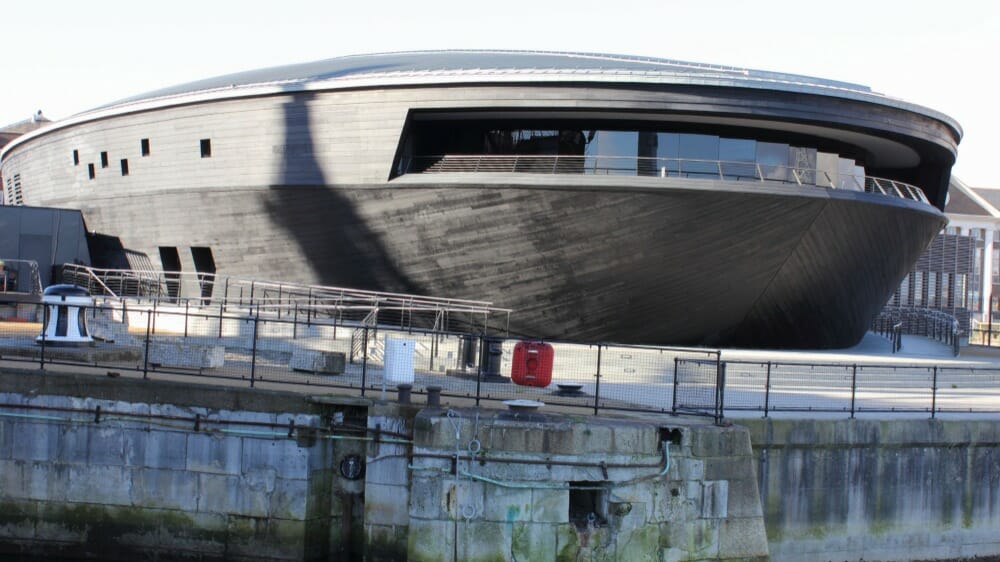 The Mary Rose Museum is dedicated to the time period of Tudor England, and showcases many artefacts from that time period.

The museum is located within the Historic Dockyard and has thousands of artefacts that were recovered from the Solent.

The most famous exhibit at the museum is the Mary Rose herself, which was destroyed in 1545 during the Battle of the Solent.

Thanks to the efforts of the museum, the ship and its artefacts have been very carefully preserved.

The museum is located in the very same home in which Charles Dickens was born in 1812, and has exhibits that illustrate the lifestyle during his time period.

There is a modest collection of Dickens artefacts, including his sofa, other items on show include pottery, glassware, and domestic furnishings.

In addition, the museum has a gift store where you may purchase mementos and there is an exhibit on Portsmouth, which is where Dickens spent his early youth.

There are several reasons why Portsmouth Harbour is such a significant location as it is home to a diverse collection of plant and animal species, it has been designated as a Site of Special Scientific Interest.

In addition to this, it has a lengthy history, going all the way back to the time of the Romans, when Portchester Castle was initially constructed.

The entrance to the harbour gives passage to the Solent, which has served as a major naval installation for hundreds of years.

Even in modern times, the harbour remains an essential component of the British fleet.

Located in an important position on a hill above Portsmouth, the fort was erected in the 1860s.

It was at first intended to serve as a defence mechanism against any potential French invasions; however, it was never put to use for that function.

In addition to its majestic walls, and subterranean tunnels, Fort Nelson is home to an extensive collection of national artillery and cannons as well as other military relics.

The museum has over 700 pieces of artillery from across the world on show and admission is free. 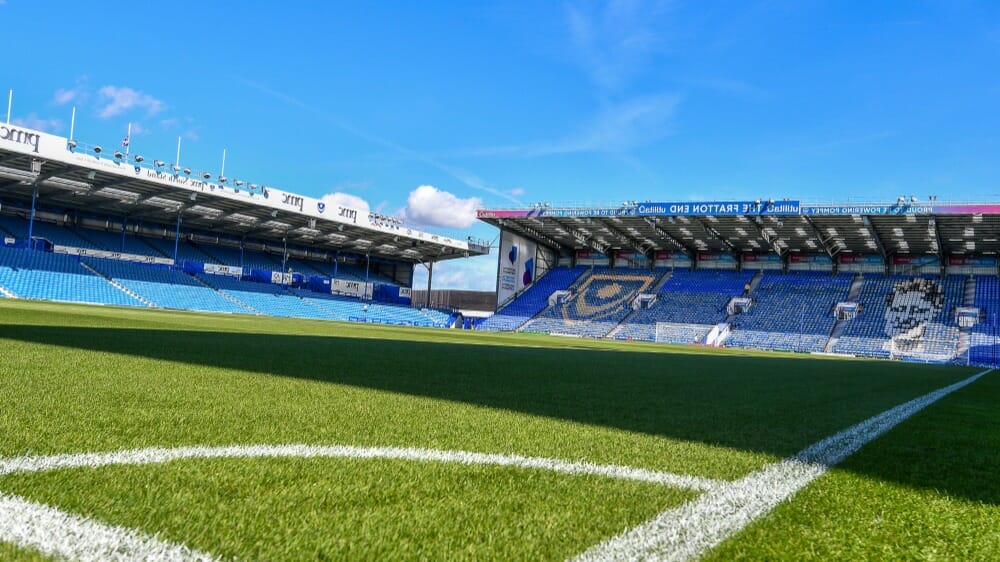 Even if Portsmouth F.C. plays in League One, a trip to Fratton Park will still have you feeling sentimental about the local football scene, so don’t let that stop you from going.

Many supporters believe that the atmosphere at the stadium is just as good as, or even better than, the Premier League.

The stadium still retains the charm and excitement that it had in the past.

There is nothing quite like going to Fratton Park to watch a match, so if you’re looking for a fun football experience, be sure to check out Portsmouth F.C. and see if you can catch one of their games.

The D-Day Museum in Portsmouth is dedicated to recounting the story of these events.

That day, more than 150,000 men landed on five different beaches in Normandy, which ultimately led to a decisive victory for the Allies and the final downfall of Nazi Germany.

In addition to relics and film footage from the historic invasion, the museum offers displays that recount the human tales of people who participated in the D-Day landing.

The museum is located on Southsea seafront, Clarence Esplanade and is open from 10 in the morning until 5 in the afternoon daily. 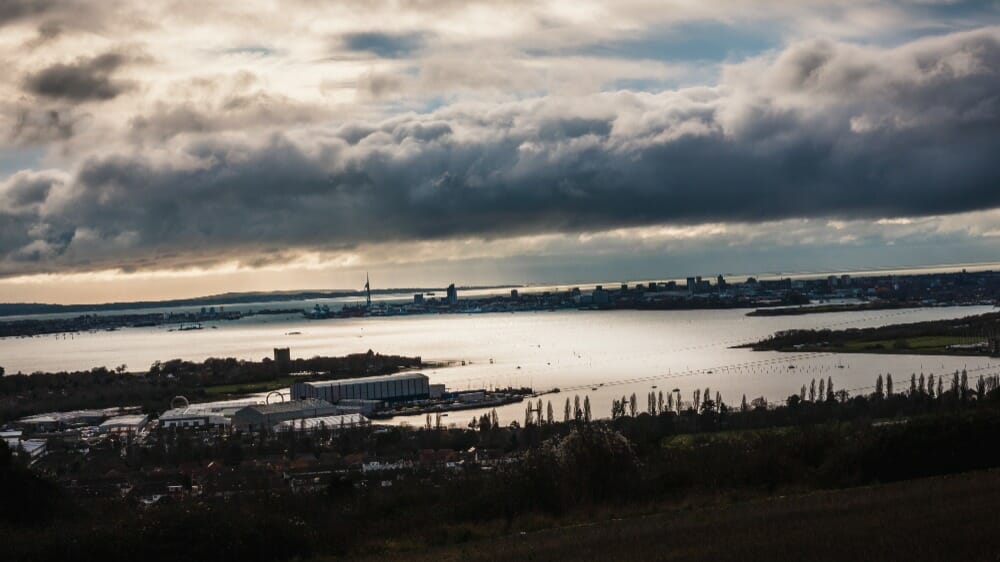 The breath-taking view of Portsmouth, its harbour, and the Isle of Wight can be seen from the top of Portsdown Hill, which is a terrific place to visit.

The hilltop is covered in blooming wildflowers during the month of April, creating for an even more picturesque scene.

The hill has an open network of paths through flowery grassland making it an excellent place to spot bees, butterflies and bird life.

It is not difficult to reach the hill and there is free parking and connections to public transport.

The Portsmouth museum is located on Museum Road and has been open to the public since 1972.

It is a Grade II listed building that has exhibits and collections relating to the city’s rich and varied history including football in Portsmouth, and art from all over the world.

There is also a collection about Sir Arthur Conan Doyle and Sherlock Holmes his famous detective.

Because admission to the museum is totally free, going there is a fantastic way to enjoy a couple of hours. 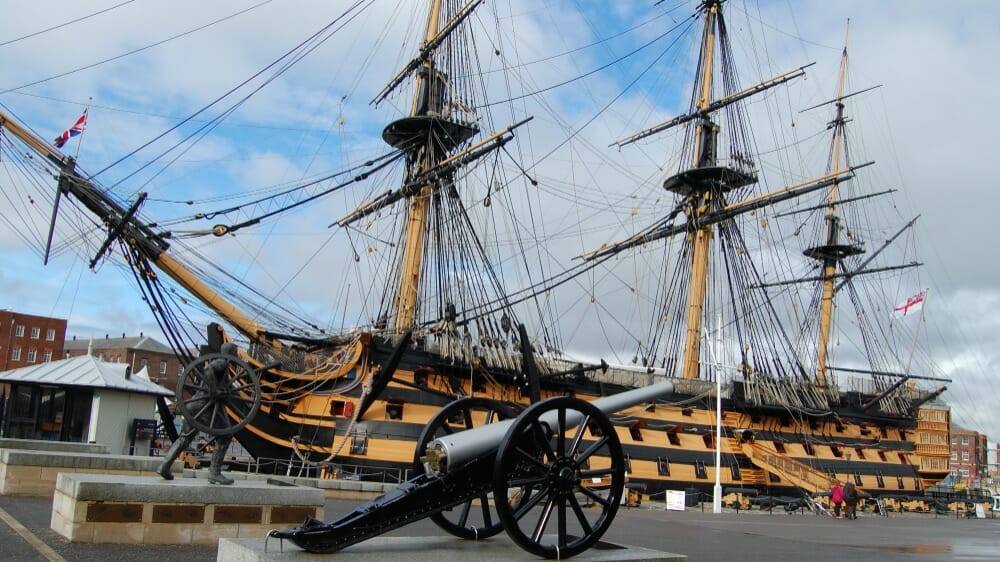 Both the HMS Victory and the HMS Warrior are well-known vessels that have played significant roles in British naval history.

The role that HMS Victory played in the Battle of Trafalgar, in which it led the British navy to a decisive victory over the French and Spanish fleets, is the primary reason for the ship’s enduring fame.

The historic ship HMS Warrior, which is now housed in a museum in Portsmouth after being renovated, is remarkable for being Britain’s first armoured warship that was ever constructed.

Both ships can be viewed at Portsmouth’s Historic Dockyard.

Located in the heart of Old Portsmouth, Portsmouth Cathedral is dedicated to Thomas Becket and became a parish church around 1320.

When the English Civil War broke out in 1642, the only elements of the building that were spared were the choir and the transept.

In 1703 the octagonal cupola and shipping lantern were added to the church after the Portsmouth diocese was established and the building was elevated to the status of a Cathedral in the 1930s.

Visitors can have a free 30 minute highlights tour that gives a great overview of the Cathedral’s history and Royal Navy connections.

One of the greatest amusement parks on the South Coast, Clarence Pier Southsea is located on Portsea Island and stretches along the coast of the island.

It is home to a number of exhilarating rollercoasters and attractions, in addition to arcades and a fantastic selection of food and drink options.

There is something for everyone at Clarence Pier, regardless of your age or whether you consider yourself to be young at heart.

Prepare your tokens, and get ready for a day filled with excitement!

Why do people visit Portsmouth?

Portsmouth can be reached in under two hours by train from London and is a fantastic place for a day trip.

There are so many interesting things to see and do including Portsmouth historic dockyard with it’s royal armouries and historic ships, and the famous Spinnaker Tower with it’s observation decks.

Does Portsmouth have a beach?

Portsmouth has a four-mile stretch of coastline that includes a long promenade with views over Portsmouth harbour and the Solent.

Enjoyed by visitors and residents there are beaches, historic fortifications, family attractions and a children’s play area.

Is there a Natural History Museum in Portsmouth?

Cumberland House is located in the Southsea area of Portsmouth.

The museum has interesting exhibits including stories of the riverbank areas, marshes, woods and urban areas in Portsmouth.